Oxford defeats DeSoto Central for first 6A win on Homecoming 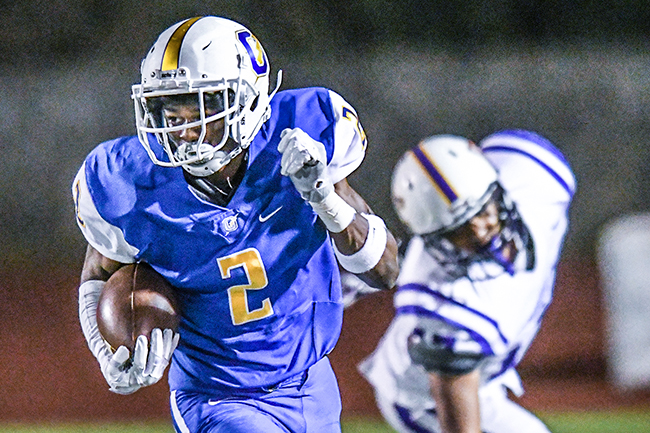 Oxford High's Jaquanzi Johnson (2) intercepts a pass in the final minute of the first half and returns it deep in Desoto Central territory at Bobby Holcomb Field in Oxford, Miss. on Thursday, October 5, 2017.

It was not pretty at times but it got the job done.

Oxford played through a sloppy performance to defeat DeSoto Central 21-7 at Bobby Holcomb Field on Thursday to earn their first win in Class 6A.

“It’s definitely a lot more fun after a win,” Oxford head coach Chris Cutcliffe said. “What we talk about now is one week at at time. We got to climb out of that whole we dug ourselves in.”

The game was moved to Thursday due to Oxford taking Friday and Monday off for Fall Break.

It was not smooth sailing for Oxford (5-3, 1-2 1-6A) as they racked up 113 yards on 13 penalties. Earning the yellow laundry on the field has been a troubling — and consistent — issue for the Chargers all season.

Thursday was no different as penalties killed drives and even took points off the scoreboard. A pick-six by senior cornerback Jaquanzi Johnson and a 52-yard touchdown run by K.J. Hadley were each negated by penalties.

“Way too many penalties on our offense,” Cutcliffe said. “When you look at the stats you’ll see penalty yardage, but the hidden yardage of so many explosive plays being called back. I felt like we could’ve easily scored a lot more points than we did.”

The points that Oxford did manage to score bookended what was otherwise a forgetful first half. Senior quarterback John Reece McClure found tight end Joe O’Keefe for a 16-yard touchdown pass less than four minutes into the game for the 7-0 lead. The second touchdown of the half came when McClure hit Sam Bianco for 37 yards and a score as the clock expired.

Oxford’s last score of the night came on a six-yard run by sophomore quarterback John Meagher early in the fourth quarter.

McClure completed 12 of 16 passes for 124 yards, two touchdowns and an interception. Bianco caught four passes for 56 yards and a touchdown.

For the fourth time in eight games the Charger defense kept the opposing team off the scoreboard. The lone score by DeSoto Central (3-5, 0-3) came when Jaguars’ London Bowers picked off a pass from Meagher. Bowers returned it 95 yards for the pick-six late in the game.

It is the second time Oxford has missed a shutout due to their opponent’s defense scoring this season.

“I think our coaching staff has just done a phenomenal job with them,” Cutcliffe said of his defense. “Week in, week out we put together a really solid game plan. I think we prepare our guys to play well.”

After a two-week absence due to a meniscus injury, Oxford had their starting running back in the lineup. Senior running back Hiram Wadlington returned to the field after missing the Chargers’ games against Southaven and South Panola.

It was a slow return for Wadlington who was feeling out his knee but grew more explosive as the game progressed. He finished with 78 yards on 16 carries.

“First game back and I did have to take it play by play,” Wadlington said. “I was a little bit nervous because I hadn’t been hit at practice all week. …after (the first hit) all the nerves were gone. I was just ready to play ball again.”