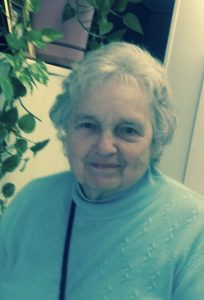 Services will be held Monday, Oct. 9 at 2 p.m. at St. Peter’s Episcopal Church with visitation from 12 p.m. until 2 p.m. in the Parish Hall. Burial will follow at Oxford’s St. Peter’s Cemetery. Waller Funeral Home is in charge of arrangements.

June was fond of telling friends that she had four children in four years and four months. She and her husband John were married for 58 years until his death five years ago. She moved to Oxford in 1966 when her husband joined the Ole Miss faculty as an English professor.

She became a seventh-grade science and home economics teacher at Oxford Junior High School for many years and then at age 50 decided to become a nurse, going back to school to obtain her LPN degree. Her ideal job was “holding babies” as a nurse on the night shift at the Oxford Hospital, which she did for several years.

June was proud to share that her two grandmothers lived to be 103. She had hoped to live to 104! She was committed to caring for all her grandchildren as babies and all her relatives as they aged.

She grew up in the Baptist Church, but often quipped that her husband never asked her to marry him, rather he asked if she could join the Episcopal Church. She was an active and faithful member of St. Peter’s Episcopal for 51 years. Six weeks ago she insisted she wanted to go to church one more time, but after arriving in the church parking lot and taking a few steps from the car decided she was too weak.

She is preceded in death by her husband, John; her parents, W. T. and Mattie Lee Lowrey, her brother William Tyndale Lowrey (who was killed in Korea serving our country) and her sister Betty Ray Agnew.

Her family gives special thanks for her dear friend of 65 years Sue Smith, Bobbie Hervey her close companion and caregiver for several years and Izetta Barringer, as well as the staff and her friends at Hermitage Gardens and Memory Makers.

For more information or to sign an online guestbook, visit www.wallerfuneralhome.com or call (662)234-7971.