Water Valley routs M.S. Palmer to stay perfect in 2-3A 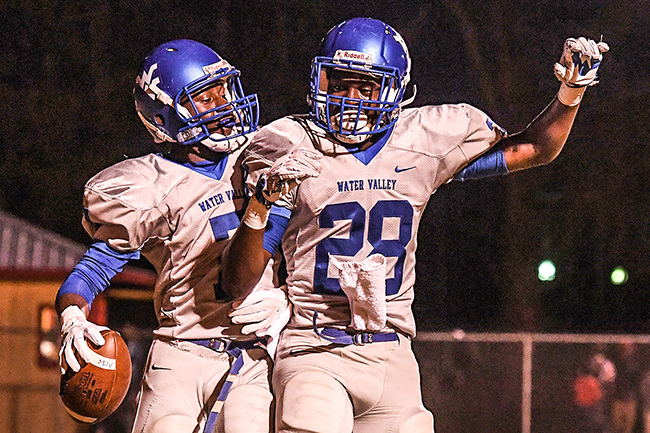 MARKS – The lively environment of M.S. Palmer’s homecoming may have given the Dragons and early lead, but Water Valley’s air attack would prove to be too much.

The Blue Devils defeated Palmer 51-26 to remain perfect in Region 2-3A play on Friday.

Joshua Handy of M.S. Palmer (4-4, 1-1 2-3A) started off the scoring five minutes into the game, but three minute later Martavius Rockett used his speed to outrun multiple Palmer defenders for the first of many Blue Devil touchdowns.

Both teams battled for field position throughout the second quarter, but with four minutes to go in the half, Ja’varius Benson returned an interception for a touchdown, giving Water Valley (5-3, 2-0) an eight-point lead.

To continue their defensive momentum, the Blue Devils forced a safety on the Dragons, then on their next offensive possession Ty Varner found Jayvon Morgan for a 22-yard touchdown with just over a minute left in the half.

“It was a big first half getting used to the atmosphere with all the festivities tonight.” Water Valley head coach Brad Embry said. “I’m really proud not only of the win, but how they handled everything tonight.”

After yet another defensive stop, the Blue Devils managed to score once more before the end of the half when Rockett caught his second touchdown pass of the night.

With a 24-point lead heading into halftime, all Water Valley had to do was hold back a second half assault from the Dragons and they would secure their second district game of the season.

The Blue Devil defense continued to hold strong coming out of the half, and Blayne Clark would score from a few yards out to extend Water Valley’s lead. After another Blue Devil touchdown, momentum started to shift in favor of the home team.

A deep pass from Ty Varner to Jayvon Morgan for 65-yards extended the lead to 32 points, but M.S. Palmer responded with three straight touchdowns.

“Last year that would be a problem, but this year we handled it well,” Embry said.  “We’re older, more mature and have great senior leadership.”

Water Valley aiming to stay perfect in 2-3A