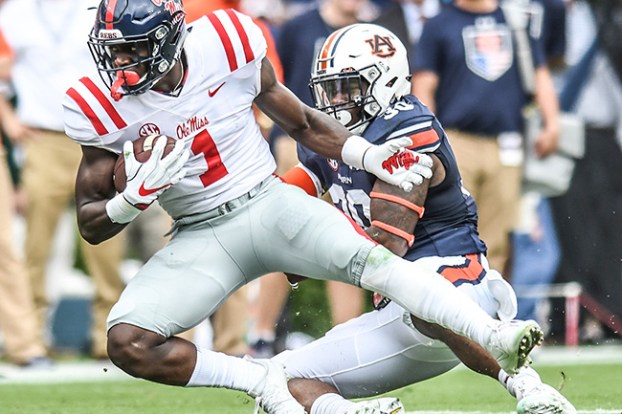 These are trying times for Ole Miss.

The Rebels are fresh off a winless road trip that was as much about how the Rebels lost as it was the outcomes themselves. A competitive setback at Cal has been followed by a pair of blowouts — a 66-3 loss at Alabama and, most recently, a 44-23 loss to Auburn in which the Tigers led by as many as five touchdowns early in the second half.

The Rebels have been outscored a combined 137-42 by Power Five opponents, leaving them searching for answers as frustration mounts. But rather than passing blame as to what’s gone wrong, players insist they’re sticking together in their search.

“We’re lifting each other up. We’re not pointing fingers,” receiver A.J. Brown said. “We’re not doing none of that. It’s all like, ‘We got you.’ We’re going to go to work. One day at a time.”

There’s plenty to of work to do on both sides of the ball.

Ole Miss (2-3, 0-2 Southeastern Conference) gave up 326 more rushing yards to Auburn with 204 of those going to Kerryon Johnson, dropping the Rebels to 122nd nationally against the run. The Tigers’ talent had something to do with that, but safety Zedrick Woods said the defense was hesitant early out of fear of making the same mistakes it did the week before against Alabama, leading to more misfits and missed tackles that have plagued the Rebels all season.

The Rebels improved in the second half, holding the Tigers to 120 yards on 26 carries after Auburn averaged nearly 10 yards a pop in the first two quarters.

Ole Miss, which entered last week’s game rushing for fewer yards a game than any FBS team, again struggled against one of the SEC’s better defense, mustering just 83 yards on 30 carries. Shea Patterson threw for 346 yards, but most of that came out of necessity with the Rebels trailing 35-3 at the half. Patterson attempted a season-high 51 passes.

Ole Miss showed some life in the second half, answering a halftime challenge from interim coach Matt Luke. The Rebels outscored Auburn 20-9 and held an opponent without a touchdown in a half for the first time all season.

The Rebels also ended a string of eight straight quarters without a touchdown of their own on Patterson’s 8-yard pass to DK Metcalf in the third quarter and found the end zone two more times in the fourth, becoming the first team this season to put up more than 14 points against Auburn.

“Coach Luke said (the second half) needs to be the turning point of our season,” Patterson said. “He said whether we win or lose, we’ve got to come out positive from this game and take some positives.”

Despite most of the late success coming against Auburn’s backups, it’s a boost of confidence for a team in desperate need of it as the Rebels prepare to return to Vaught-Hemingway Stadium to begin a three-game homestand starting with Vanderbilt on Saturday (2:30 p.m., SEC Network). It starts a more manageable portion of the schedule that also includes LSU, Arkansas, Texas A&M and Louisiana at home and trips to Kentucky and Mississippi State.

“I think we’ve got to build off the second half as far as their psyche is concerned and just keep moving forward, go back to work and get better,” Luke said. “I felt like there was some improvement this week, and we’ve got to keep building on that.”

It will be a unified effort from the Rebels to stabilize their season.

“We’ve been through so much adversity,” Patterson said. “I think we can handle anything.”

It’s been difficult for Ole Miss to escape the negativity that comes with a nine-touchdown loss, but there’s plenty of... read more