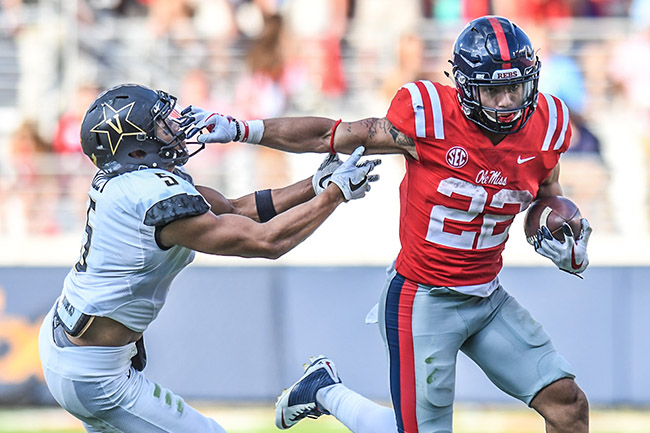 Ole Miss’ running game has shown signs of life recently thanks in large part to its senior running back.

But Jordan Wilkins isn’t about to take all the credit.

The Rebels entered last week’s game against Vanderbilt last in the Southeastern Conference and 126th nationally in rushing yards per game. Yet Ole Miss has actually improved on its numbers the last few weeks since ranking dead last among FBS teams.

Wilkins has been the catalyst.

He’s only run for 382 yards this season, but that accounts for 60 percent of all of the Rebels’ yards on the ground (632). Wilkins has rushed for 279 of those in the last three games, including a season-high 113 in Ole Miss’ 57-35 win over Vanderbilt.

It was part of a 252-yard rushing day for the Rebels, the most they’ve racked up on the ground in an SEC game in eight years (359 against Tennessee in 2009).

“Just trying to get better week to week,” Wilkins said of his recent production. “I feel like our game plan and our o-line has been doing a good job making holes, and they’re getting me out in space. Just trying to capitalize and do the most I can with it.”

Wilkins has also benefited from a cleaner bill of health.

A preseason knee injury lingered into the early part of the season, but coaches and teammates said they can see a difference in Wilkins’ explosion now. He showed off some of that Saturday, running through multiple tackles during his 18-yard touchdown run in the second quarter and later outrunning the Commodores’ defense down the sideline for a 75-yard scamper that would’ve been a touchdown if not for a holding penalty.

The Rebels, who came in averaging an SEC-worst 2.9 yards per carry, ripped off 6.1 yards a carry against Vanderbilt. Lots of teams have had success on the ground this season against the Commodores, who began the day 12th in the SEC against the run, but quarterback Shea Patterson said his backfield mate along with an offensive line that’s getting more push deserve plenty of credit for opening up the rest of the offense for the Rebels, who racked up 603 total yards.

“It’s huge,” Patterson said. “Once we can run the ball successfully, we’re really dangerous because that opens up our passing game for all the athletes.”

It was the latest quality outing for Wilkins, who’s already having a career year in his first season as the Rebels’ featured back. The 6-foot-1, 217-pounder averaged 5 yards on his 13 carries with a touchdown the previous week against Auburn after being the lone bright spot for the offense against Alabama with 101 yards on just 12 carries, snapping the Crimson Tide’s streak of 25 straight games without allowing a 100-yard rusher.

He averaged 6.3 yards against Vanderbilt on 18 carries, a season-high.

“I just think a back like Jordan, the more you feed him the ball, the better he gets,” offensive coordinator Phil Longo said. “It’s like anything else in that it just becomes a little bit more instinctive. He’s hitting the holes better, he has more confidence, and he’s healthier. He’s running people over when he needs to. He has the ability to run by you. I think Jordan is heating up.”

Wilkins’ latest effort helped Ole Miss snap a three-game losing streak heading into Saturday’s game against LSU (6:15 p.m., ESPN). It will be the fourth top-60 run defense the Rebels will have faced this season, but the running game is going into it with some confidence starting with Wilkins.

“That’s been a focus for us is getting in a rhythm for our whole team,” Wilkins said. “I think we did that and played with a lot of energy and passion (Saturday).

“We have another big game next week with LSU, but we’ll be ready.”

Ole Miss puts it all together to answer call…