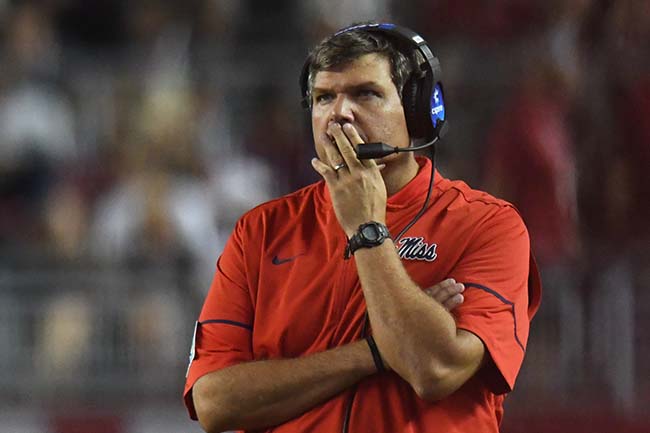 The win was desperately needed, but interim coach Matt Luke knows it’s not a cure-all for Ole Miss.

The Rebels snapped a three-game losing streak with their 57-35 win over Vanderbilt last week. It was one of the more complete games for Ole Miss this season, but there’s plenty left to get corrected before LSU visits Vaught-Hemingway Stadium on Saturday (6:15 p.m., ESPN).

“The challenge after a win is to not let a win mask some of the mistakes you made,” Luke said. “Continue to get better week in and week out. Don’t think everything is the way it needs to be.”

Not much went wrong for the offense against Vanderbilt.

The Rebels (3-3, 1-2 SEC) rolled up 603 total yards, getting their usual contributions from the SEC’s top passing offense. Quarterback Shea Patterson threw for 351 yards and four touchdowns while accounting for five total touchdowns and staying away from turnovers for the second straight game.

It was the running game that showed the most life it has all season with a season-high 252 yards. Jordan Wilkins led the charge with a season-best 113 yards and has run for 279 yards over the last three games.

Now the Rebels want to establish consistency in a running game that still ranks 12th in the SEC and is set to face its fourth top-60 run defense against LSU (5-2, 2-1).

“Once we can run the ball successfully, we’re really dangerous,” Patterson said. “That opens up our pass game for all the athletes we have at wideout.”

Ole Miss’ defense was as active up front as it’s been all season against the Commodores as the Rebels notched a season-high seven sacks and eight tackles for loss. But another week passed where Ole Miss couldn’t stop an opponent from running the ball.

The Commodores averaged more than 5 yards on their 37 carries against the nation’s 119th-ranked run defense. Being out of position continues to be the crux of the issue, coaches said, particularly when teams hit explosive runs on the Rebels, who are giving up 5.5 yards a carry this season.

But both Luke and defensive coordinator Wesley McGriff said it’s not happening as often as it was early in the season. Again, consistency is the goal.

“It wasn’t necessarily getting beat physically,” Luke said. “It’s just fitting the right spots consistently. I think that’s the challenge for a young team or an inexperienced team is to be consistent because I think you saw us do it right more.”

Defensive ends Qaadir Sheppard (ankle) and Victor Evans (leg) will have surgery this week and could miss the rest of the season, Luke said. Linebacker Jarrion Street is going through concussion protocol and will be evaluated later in the week.

Kicker Gary Wunderlich continues to deal with a lingering hamstring injury. Freshman Luke Logan filled in last week and made both of his field goals, but Wunderlich will kick this week if he’s healthy enough.

“He’s been in those pressure situations before,” Luke said of Wunderlich. “We’ll see where he is later on in the week.”

Receiver Markell Pack is dealing with a knee injury he reaggravated during pregame warmups at Auburn on Oct. 7. Luke said he hopes Pack can return at some point this season.