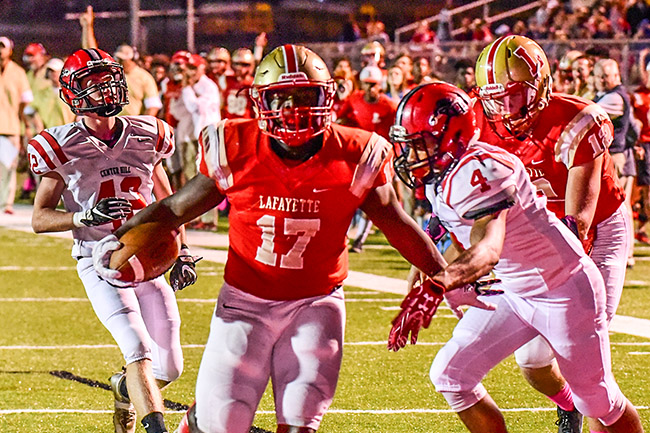 The Lafayette Commodores bounced back in a big way this week, beating the Center Hill Mustangs by a score of 47-14 on Friday night at William L. Buford stadium.

After a tough 14-12 loss to Grenada, it would have been easy for Lafayette (3-6, 3-2 1-5A) to fall back into the slump they began the season in. Instead, they seemed almost angry at the start the game. The fired up Commodores didn’t waste any time in the first quarter taking a commanding 14-0 lead after some excellent rushing by running back Jamarcus Quarles and quarterback Randy Anderson moved the Commodores down for two quick scores.

However, Center Hill’s unorthodox triple option offense presented some difficult looks that the Commodores’ defense was not used to seeing.

“You get three work days to do it with your team, and that’s why folks run it, because its tough,” Lafayette head coach Michael Fair said. “They put some stress on you, and if you don’t defend all three, the dive, quarterback and the pitch, they find the weakness and they exploit it.

“Our guys that covered the pitch tonight were a little late getting there,” Fair continued. “Our guys flew around the ball and played hard, it’s just that offense they get you out of position and that’s what happened a few times tonight. I was proud of our coaches and players.”

Center Hill (1-8, 1-4) moved down the field in response and seemed primed to split the deficit, but defensive back Samuel Woodall came up with an interception and ran it all the way back for a Commodore touchdown and a 21-0 lead. The Commodore defense came up big on the next Center Hill possession as well, as they forced a fumble, which Quarles plugged into the end zone from 3 yards out the next play.

That was basically the story of Center Hill’s offense for the game. While they did put up 14 points, they also turned the ball over five times, killing multiple promising drives.“

We have some good athletes over on the defensive side of the ball, and when that ball is in air for a pitch or something like that, things happen and we were able to get a couple interceptions and a couple scoops on fumbles,” Fair said. “It comes from running to the football. That’s what we preach to them, and we’re doing that, and when the ball hits the ground we want to have somebody close.”

“We don’t hide it here at Lafayette, we’re a running football team, and we’ve embraced that, and I thought we did some things in the passing game as well that were good,” Fair said. “Our running backs are seeing the hole better than they have been all year, and our offensive line is growing up, so it’s fun to watch them.”

Next week’s game is even more crucial for Lafayette who travels to Olive Branch (8-1, 4-1) to try and move closer to a playoff berth.