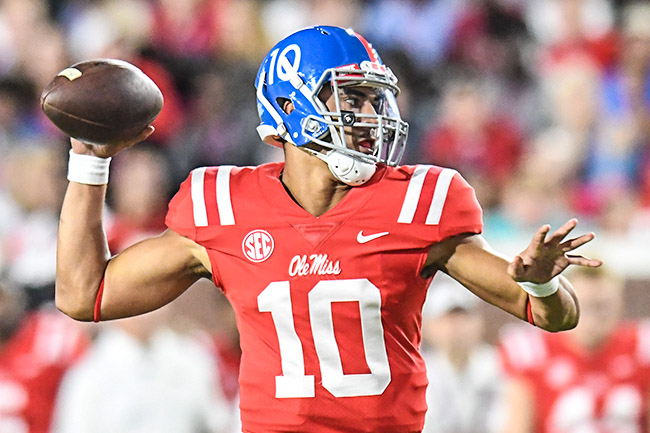 Jordan Ta’amu is set to make his first start for the Southeastern Conference’s top passing offense this weekend.

But Ole Miss’ coaches don’t want their new quarterback feeling like it has to do it all on his own.

The Rebels begin life without Shea Patterson against Arkansas on Saturday (11 a.m., SEC Network) after the sophomore quarterback tore the posterior cruciate ligament in his right knee in a 40-24 loss to LSU. Patterson will have his knee immobilized for the next three weeks, interim coach Matt Luke said, before it’s determined whether surgery will be required.

It leaves Ta’amu at the top of the depth chart after playing in three games this season as Patterson’s backup. Patterson leads the SEC in passing yards (2,259) and passing yards per game (322.7) while ranking second in touchdown passes (17).

The Rebels (3-4, 1-3 SEC) aren’t expecting all of that from Ta’amu, but interim coach Matt Luke wants Ta’amu’s teammates to elevate their play in order to make the new signal caller’s life easier against Arkansas (2-5, 0-4), which comes into Saturday’s game losers of three straight.

“I think everybody else around him has to step up — o-line, receivers, running backs,” Luke said. “We’ve got to do a great job of keeping the game plan simple and go execute. I think the more we do that, the better chance we have.”

Specifically, Ole Miss will need more from a usually reliable receiving corps after an off night against LSU. Dropped passes that led to missed chances deep in LSU territory were a theme as the Rebels threw for just 194 yards, their second-lowest total of the season. No receiver had more than four catches.

“I think if we catch a few of those, it probably changes the entire complexion of the football game,” offensive coordinator Phil Longo said. “Those are just plays we’re going to have to make.”

In his most extensive action of the season against LSU with Patterson out, Ta’amu led two scoring drives and finished 7 of 11 passing for 78 yards while adding 20 rushing yards on three carries. He’s averaging 8.7 yards on his six carries this season — a facet coaches believe can be combined with his arm to help keep Ta’amu in his comfort zone.

Coaches have long praised Ta’amu’s touch on the deep ball, but it’s the timing on the shorter throws where Luke thought Ta’amu made strides against the Tigers. Five of his completions covered 55 yards on Ole Miss’ final possession that resulted in a touchdown.

It’s an area in which Ta’amu has progressed since the spring to help himself as he prepares to make his first start with the Rebels.

“You don’t want a guy back there holding the ball and patting the ball, and that was one of the things I saw in the game he wasn’t doing,” Luke said. “I was really pleased with that because the game does speed up when you get in this league and you do have to make fast decisions, and I thought he did a nice job of that in the game.”

Said Longo, “He knows the system and athletically he’s very capable. We’ve just got to get him to translate what he knows to game speed on Saturday.”