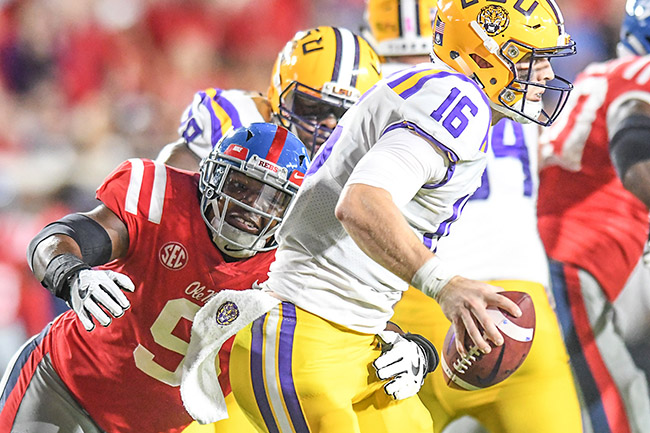 Ole Miss is trying just about anything at this point when it comes to slowing teams down on the ground.

That includes more bodies along the defensive line.

After saying early last week the Rebels likely wouldn’t stray from their base four-man front against Arkansas, defensive coordinator Wesley McGriff called on an extra lineman at times to beef up against the Razorbacks. Arkansas still had its way on the ground, racking up 260 rushing yards against the nation’s 126th-ranked run defense, but McGriff said he liked what he saw from the five-man front at times, particularly during a fourth quarter in which Ole Miss held Arkansas to 56 yards on 13 carries — a win for a defense yielding an SEC-worst 5.7 yards per carry.

The new alignment pushed ends Marquis Haynes and Breeland Speaks out wider to set the edges and left one linebacker, leading tackler DeMarquis Gates, on the field instead of the usual pair in Ole Miss’ base 4-2-5 scheme. McGriff said linebacker Brenden Williams, at 242 pounds, could also drop down to end to lend support in the future.

“It’s not going to go away. You’ll see it again,” McGriff said of the look. “Anything we can do to help us get these young men into the best position to stop the run and win games, we’re going to do that. As coaches, we have to get outside our own element sometimes and get outside of our comfort zone and do what’s best for the guys that are in the building.”

When the Rebels were in their base defense, Gates and sophomore Jarrion Street were often McGriff’s linebacker combination of choice. McGriff said Street has the speed and athleticism to make up for any mistakes.

“We got some mileage out of getting those guys in the game at the same time,”McGriff said. “We’ll revisit that. You’ll definitely see that combination again.”

For all the yards Ole Miss’ offense is putting up, the Rebels are leaving points on the field of late by failing to finish drives.

Gary Wunderlich was called on to kick three field goals apiece against LSU and Arkansas the last two weeks with all but one of those coming inside the 20-yard line. The other one came after a drive stalled at LSU’s 22.

“At the end of the day, we have to execute,” offensive coordinator Phil Longo said. “I’m not making excuses for our red-zone deal. I tell you what our emphasis is each week, the red zone is our emphasis this week without question.”

Preparing for no Woods

Starting free safety Zedrick Woods suffered a concussion against Arkansas and is going through protocol this week. McGriff is planning on not having the Rebels’ most established player in the secondary come Saturday.

Woods left last week’s game in the fourth quarter after taking a hit to the head and didn’t return. Woods, who’s made 22 starts, is second on the team with 52 tackles.

Should Woods not be able to go against Kentucky, C.J. Hampton would fill in. McGriff said nickel corner Montrell Custis may also get more reps at safety after practicing there last week.

“We’ll kind of prepare for not having (Woods) in the lineup, but I certainly hope he turns a corner and is able to play for us on Saturday,” McGriff said.

As for other injured players, Luke said he’s optimistic about getting center Sean Rawlings (concussion) back for Saturday’s game. Rawlings will be limited in today’s practice but should be full speed by Wednesday, Luke said.

Running back Jordan Wilkins (ankle) will be limited in practice but will play Saturday, Luke said. Cornerback Javien Hamilton is also going through concussion protocol this week while defensive tackle Ross Donelly will be held out for another week.

Cornerback Ken Webster (hamstring) didn’t dress out against Arkansas, but Luke said he’s “hopeful” to have him against Kentucky.