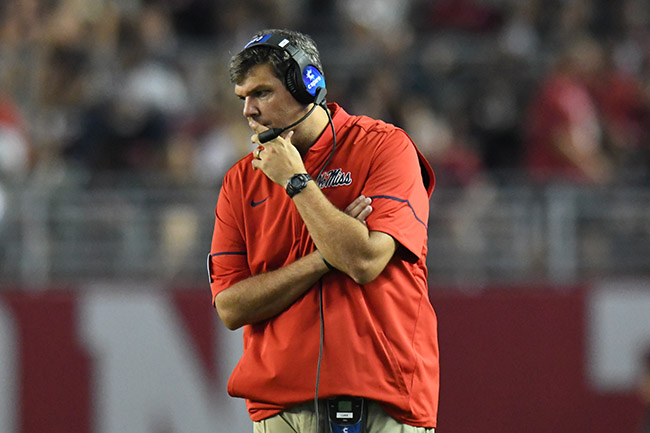 Yet interim coach Matt Luke is trying to stay positive on the recruiting trail as the program goes through a losing season on the field and the uncertainty of the NCAA investigation’s end result off of it. The Rebels are 3-5 heading into Saturday’s game at Kentucky (3 p.m., SEC Network) amid a season that already won’t include a bowl game because of the postseason ban the program has self-imposed as a result of the probe with the possibility of more penalties coming.

Luke said it’s important now more than ever for he and his staff to stay in close contact with recruits so they can be ready for whatever happens.

“People want to come to Ole Miss,” Luke said. “Nobody that comes to the Grove or comes to a game that they don’t want to come back to. Ole Miss sells itself. We’ve just got to be in great position so that when all this stuff does go through, you’re right there in position to strike.”

Ole Miss, which is facing 21 alleged violations — 15 of them Level I, or the most serious, charges — took its case before the NCAA’s Committee on Infractions in September with a final ruling from the committee set to be handed down sometime in November. There’s also the matter of who’s going to coach the Rebels next season. While athletic director Ross Bjork has yet to officially rule out Luke getting the permanent job, the school has hired Turnkey Search to assist in the process of finding a new coach.

The class Ole Miss is piecing together reflects all the uncertainty. The Rebels have 10 commitments — none rated higher than a three-star prospect in 247Sports.com’s composite rankings — in a 2018 class that ranks 75th nationally by Rivals.com and 78th in the 247Sports.com composite with less than two months left until college football’s first early signing period beginning Dec. 20.

But a selling point Luke believes Ole Miss has over other schools despite its off-field issues is the opportunity for immediate playing time, particularly on a defense that’s in need of impact players at linebacker and in the secondary. The Rebels are 116th nationally in total defense and scoring defense and 126th in rushing defense.

“I think defensively they see opportunities to play. That’s always a positive,” Luke said. “And then offensively just the numbers we put up and how explosive we are, you just stay in it. You stay close and say, ‘Hey man, look, you have opportunities to come in and help us.’”

Eight of the Rebels’ commitments are on the defensive side of the ball, including five defensive linemen. Hillcrest (Tuscaloosa, Alabama) outside linebacker Jacquez Jones is the only linebacker commit in the class so far while Lee (Montgomery, Alabama) defensive back JaKorey Hawkins is the lone cornerback commit.

Byrnes (Duncan, South Carolina) standout Damarcus Gregory, Ole Miss’ highest-rated commit, will continue to the Rebels’ recent run of highly touted receiver signees should he ultimately ink with Ole Miss. The Rebels will have to wait and see as to how much more quality it can add to the class.

Five-man front ‘not going to go away’ for Ole…