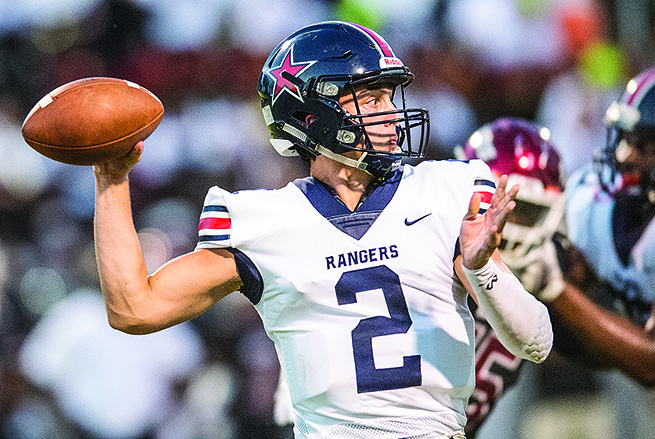 After a redshirt season at Louisiana Tech in 2016 Jack Abrahama (2) has led Northwest MS Community College to the MACJC playoffs. (NWCCRangers.com)

Reunited and it feels so good.

Lyrics to the song ‘Reunited’ by Peaches and Herbs in 1978 and also what fans of the Northwest Mississippi Community College football team should be singing as well.

Former Oxford assistant coach Stan Hill and quarterback Jack Abraham have indeed reunited in Senatobia and have put the Rangers in national title contention. Northwest (7-1) is currently ranked No. 4 in the nation and hosting No. 12 Hinds Community College (6-2) in the Mississippi Association of Community and Junior College (MACJC) semifinals on Saturday afternoon.

It was a pairing that seemed to have run its course once Abraham graduated and signed with Louisiana Tech in 2016 and Hill taking the offensive coordinator position at Northwest.

Abraham redshirted with the Bulldogs for the 2016 season, but even though he never took a snap in a game it was clear to the former Mississippi Gatorade Player of the Year things were much different.

“It was a good experience,” Abraham said of his time in Ruston. “Getting down there and seeing how the game works and how fast it is. Kind of adjusting to the speed of the game. Because when I got there it was kind of an eye-opening experience how fast it was and how much deeper it gets when it comes to defense.”

Once the season concluded Abraham realized he was going to need a place to adjust and catch his breath. Announcing his decision to transfer from Louisiana Tech made it clear he could have to go to a lower level school than Division-I if he wanted to play this season. There was only one destination he had in mind.

At Oxford Abraham led the Chargers to three straight Class 5A state championship appearances and multiple region titles. Under the coaching of Hill he excelled in an offense that was up-tempo. Abraham threw for 12,021 yards and 130 touchdowns during his high school career.

He felt comfortable in Hill’s system and wanted to feel that way again.

“I knew that coach Stan was up here and once I knew I was going to go to JUCO I knew for sure I was going to come here,” Abraham said. “It was awesome having that experience in high school and getting to do it all over again. It’s been a fun ride and I hope to keep it going.”

In eight games this season he has thrown for 1,961 yards and 15 touchdowns. Abraham also picked up his first-ever rushing touchdown earlier in the season and has 98 yards on 20 carries.

“Jack has stepped in and fit the mold of what we’re looking for at quarterback,” Hill said. “We’re both reading from the same sheet of music. We understand each other. He understands what I want from a quarterback and he goes out there and executes on an extremely high level. …he came back and was a lot better player. He was coached at a Division-I level. Anytime you go to a college you’re going to get better.”

Abraham will graduate in December and plans to continue his football career elsewhere. He has offers from Ball State and South Alabama while Toledo, UTSA, Samford and others have him on his radar.