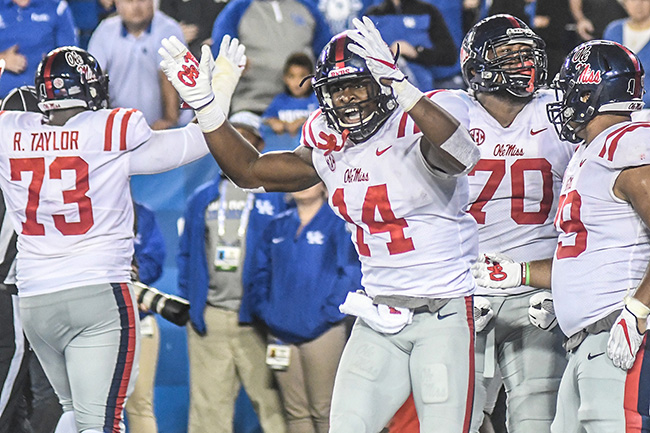 LEXINGTON, Ky. — First came the final whistle. Then the jubilation.

When all the back and forth was finished and this week’s craziness was over, Ole Miss’ players ran onto the Kroger Field turf to celebrate. They lingered, sprinting over to the end of the field where most of their fans were located and running along the wall slapping hands as they made their way to the visiting team’s locker room.

“Throw the ball to Julio Metcalf!” defensive tackle Josiah Coatney repeatedly yelled as he entered the tunnel, likening 6-foot-4 receiver DK Metcalf, who came down with the winning touchdown catch with 5 seconds to spare in Ole Miss’ 37-34 win over Kentucky on Saturday, to Atlanta Falcons star Julio Jones.

Coaches were just as ecstatic, waiting to greet players in the tunnel as they passed by. Ear-to-ear smiles were gladly reciprocated. Hugs were exchanged. At one point, interim coach Matt Luke, who was drenched with water, glanced up at the Ole Miss contingent before vanishing into the tunnel and could hardly contain his emotions.

“Way to go, fellas,” running backs coach Derrick Nix said as players walked — well, almost skipped — by. “You guys are sticking with it.”

It looked more like a celebration fit for a championship rather than a win over the third-place team in a watered-down SEC East. But hey, why not?

Look, no kind of win or amount of wins is going to change the Rebels’ predicament. By now, you know the kind of off-field issues Ole Miss is facing that, while winning and losing is important to players, coaches and fans, have made this season a wash. There’s no possibility of a bowl game because of the 21 alleged rules violations the program is facing in an NCAA investigation that should finally reach its conclusion any week now with college sports’ governing body set to announce the final penalties following the school’s hearing with the Committee on Infractions back in September.

Add the fact that a group of players, nearly all of which have nothing to do with the program’s troubles and are having to pay for the sins of others, lost their head coach weeks before the season began, their starting quarterback halfway through it and a 24-point lead to a woeful Arkansas team — the same one that had to rally to squeak past Coastal Carolina on Saturday — in a 38-37 loss that put Ole Miss in the SEC West cellar, it would’ve been easy for the Rebels to think another gut punch was coming after Kentucky’s Bennie Snell capped a draining 12-play, 95-yard scoring drive that left the Wildcats with a 34-30 lead and just 2:14 on the clock.

“We always believe in the offense, but of course you’re going to have that little doubt,” linebacker DeMarquis Gates said. “We’re human.”

But Jordan Ta’amu, who continues to looked more like a seasoned veteran than a quarterback still trying to get acclimated to life in the SEC, told his teammates this was going to be different and then delivered, completing eight passes on the Rebels’ final drive and running for 10 more yards to reach Kentucky’s 7-yard line with 15 seconds to play.

Three plays later, Ta’amu put a pass up in the back of the end zone for Metcalf, who used every bit of his tall frame to extend over cornerback Lonnie Johnson Jr. and get a foot in bounds before falling to the ground.

“A lot of happy guys in that locker room,” Luke said. “Just happy for the kids because they’ve been battling, and I’m glad something finally went their way.”

Instead of dropping their heads for what would’ve been the sixth time in nine games during their walk to the locker room, the Rebels, who trailed by 10 early in the second half, got to leave an opponent’s field with their heads held high. With smiles. With laughs. With sheer joy amid a season where much of that has been hard to come by.

I’ll just let Metcalf tell you what Saturday night in the Bluegrass State meant to the Rebels.

“People count us out all the time,” Metcalf said, “and we just keep going.”