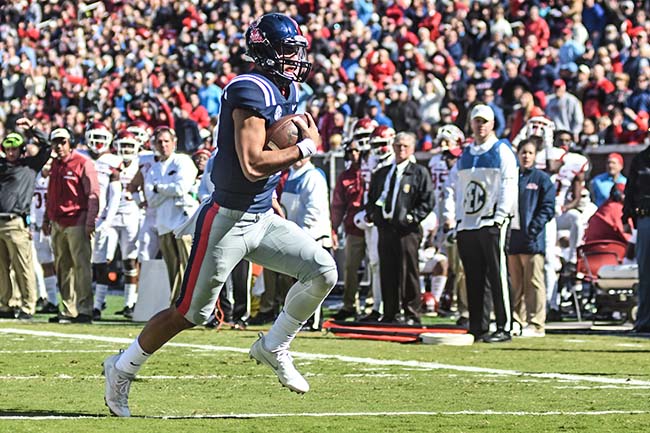 Ole Miss with the two-minute drive of the season. Metcalf makes a seven-yard TD catch in the far left corner of the end zone to give the Rebels the lead in this see-saw.

Ole Miss adds another Wunderlich field goal — this one from 49 yards — to give the Rebels their first lead since midway through the second quarter. Ole Miss 30, Kentucky 27, 14:16 4Q

Ole Miss drives to Kentucky’s 9, but a false start, a delay of game and a hold (that was declined) force the Rebels to settle for another field goal from Wunderlich, who connects from 38 yards out. Kentucky 27, Ole Miss 20, 3:43 3Q

Kentucky doesn’t waste a lot of time extending its lead, needing just five plays to find the end zone on its first drive of the second half. The touchdown came on a busted coverage that left C.J. Conrad wide open down the middle of the field for a 46-yard catch-and-run score. Kentucky 27, Ole Miss 17, 12:27 3Q

The back and forth between the teams continues with Kentucky responding on its next drive. Snell finishes it with a 1-yard scoring run a play after receiver Isaiah Epps kept the drive alive with a highlight-reel catch on third-and-12 to get the Wildcats close. Kentucky 20, Ole Miss 17, 0:13 2Q

Ole Miss responds in just six plays to grab the lead again on Ta’amu’s 20-yard touchdown pass to Van Jefferson, who slipped free down the middle of the field on a fake screen. The Rebels set that up on the previous play with a screen to Jordan Wilkins. Ole Miss 17, Kentucky 13, 6:18 2Q

Defensive end Breeland Speaks is called for targeting after leading his with head on a tackle of quarterback Steven Johnson. The call was upheld after review. Speaks will miss the rest of the game.

A 14-yard pass to Knox followed by a 40-yard completion to Van Jefferson gets Ole Miss deep into Kentucky territory before the Rebels’ drive stalls. DK Metcalf can’t haul in Ta’amu’s fade in the end zone on third down, and Ole Miss settles for Gary Wunderlich’s 33-yard field goal. Ole Miss 10, Kentucky 6, 12:50 2Q

Josiah Coatney and a host of other Ole Miss defenders get to Kentucky’s Steven Johnson for a sack on third down from Ole Miss’ 10, forcing the Wildcats into another field goal. MacGinnis connects from 34 yards out to cut into the Rebels’ lead. Ole Miss 7, Kentucky 6, 14:15 2Q

LEXINGTON, Ky. — Ole Miss is in the Bluegrass State today trying to get back in the win column against Kentucky at Kroger Field.

The Rebels (3-5, 1-4 SEC) come in losers of two straight following last week’s last-second loss to Arkansas. Meanwhile, Kentucky (6-2, 3-2)) is half a game out of second place in the SEC East having won three of its last four games, including a 29-26 home win over Tennessee a week ago. The Wildcats are 4-1 at Kroger Field.

The teams haven’t played since 2011. It will be the first road start for Ole Miss quarterback Jordan Ta’amu.

The game will begin at 3 p.m. CT and be televised by the SEC Network. Check back here for live updates.

Inside Ole Miss’ concussion protocol: What players have to…