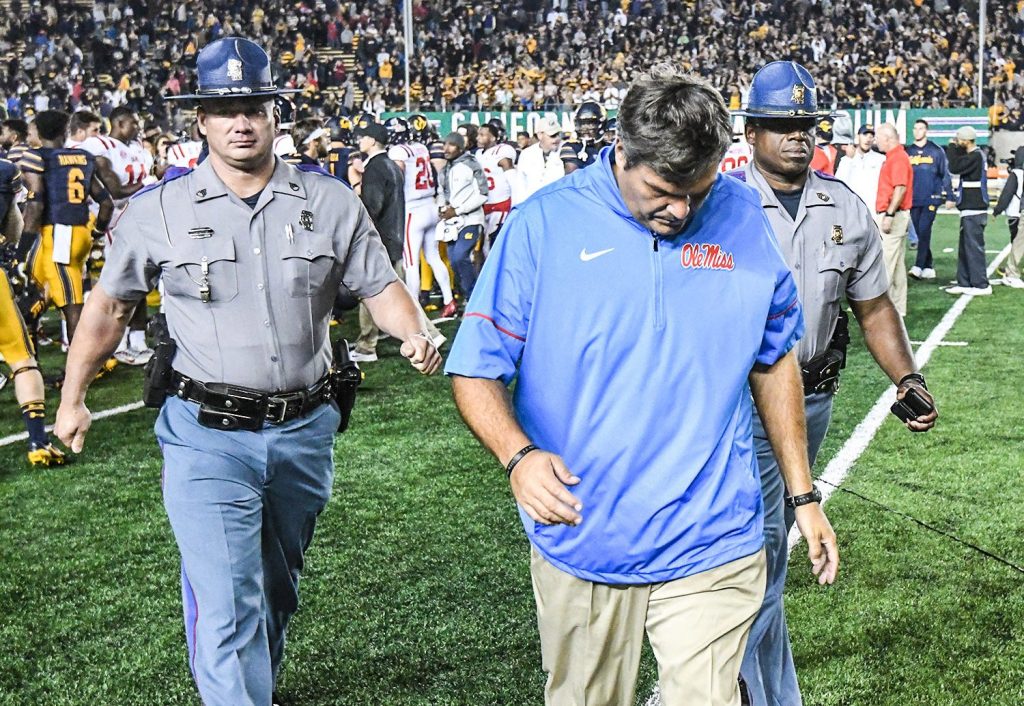 The football coach hire is always a big deal for super conference universities. So much money and marketing depend on it.

Not to mention reputation, since the football coach at a place like Ole Miss in the SEC is usually one of the most recognizable figures.

But this upcoming hire by Ole Miss, led by university Vice Chancellor for Athletics Ross Bjork, is particularly significant since a quick bounce-back from current self-imposed NCAA probation for the football program is important, for all the reasons listed above.

Make the wrong hire, and a couple of years of losing seasons and less-than-sellout crowds turns into seven years of bad football luck. Make the right hire and NCAA probation and losing seasons are quickly forgotten.

Instinct here says that Bjork and Ole Miss are more than up to the task and that having the extra time for assessment during this season of probation with interim coach Matt Luke in the leadership role has been time well spent.

Bjork said this week the university would be “ready to strike” with a hire, in full recognition that the coaching carousel is about to begin and decisions will be needed. Speculations continue to run about who is at the top of Bjork’s list, with names from Alabama defensive coordinator Jeremy Pruitt to SMU head coach Chad Morris bantered about.

The assumption is safe that those men are somewhere on the list, but there’s no point guessing who’s at the top or even who else is on the list. Ole Miss isn’t the only school searching for a head coach and more situations could develop in the coming weeks.

A few things we do know:

*The new early signing period that begins December 20 for college football means that Ole Miss will need a new coach in place by the end of November, ideally. The new coach will need every bit of three weeks to explain the opportunity to recruits. Bjork has said efforts will be made to move fast, and it should only be a matter of days to a week once the season ends Thanksgiving Day.

*The final decision by the NCAA is expected very soon. From a hiring standpoint, and in the spirit of moving forward, sooner is better. The NCAA made its case. Ole Miss responded. At this point, the university just needs to know the decision so it can move forward.

*If Ole Miss does get another year of bowl ban some current Rebel players will transfer since according to NCAA rules two years of probation negates typical transfer restrictions. There’s just no avoiding that reality. But a new coach will be starting nearly from scratch anyway so this is just something they would have to manage.

*More lean days regarding wins and losses are ahead for Ole Miss football regardless of how the NCAA result comes down or who the new football coach will be. That’s because scholarship reductions already imposed related to the NCAA and a couple of light recruiting years under former coach Hugh Freeze (he blamed the NCAA investigation) don’t exactly yield SEC-winning depth.

However, the right hire will be able to get Ole Miss football back on track sooner than later. In nearby Birmingham, we watched UAB kill its football program due to lack of support and lackluster performances yet this season, its first back after a two-year hiatus, the Blazers have a winning record and are bowl-bound.

Ole Miss and the SEC is a long way from UAB and Conference USA, but the point is that turning a program around from dire consequences is doable. It’s all about the head coach and the type of momentum they can build.

That’s why this hire is a so big for Ole Miss. Not just anyone will do.

We all know Mother Nature is not predictable

We must teach children tolerance, compromise