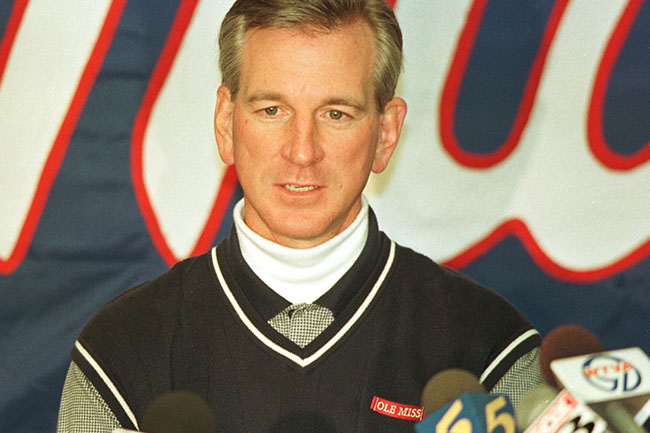 Mississippi head football coach Tommy Tuberville holds a press conference following the Mississippi-Mississippi State game at Vaught-Hemingway Stadium in Oxford, Miss. Thursday, Nov. 26, 1998. Tuberville would only answer questions relating to the game, and would not discuss whether he will accept the head coaching job at Auburn University. (AP Photo/Bruce Newman, Oxford EAGLE)

Former coach-turned-ESPN analyst Tommy Tuberville will be part of the network’s crew on the call for the Rebels’ game against Texas A&M on Saturday (6 p.m., ESPN2). Tuberville coached Ole Miss from 1995-98 and made the infamous comment that he’d have to be carried out of Oxford “in a pine box” when asked during his final season with the Rebels about rumors he was leaving Ole Miss for Auburn, where he was coaching the next season.

Tuberville coached at Auburn from 1999-2008 and is even campaigning to be the Tigers’ next athletic director. He was also the head coach at Texas Tech and, most recently, Cincinnati before resigning after last season.