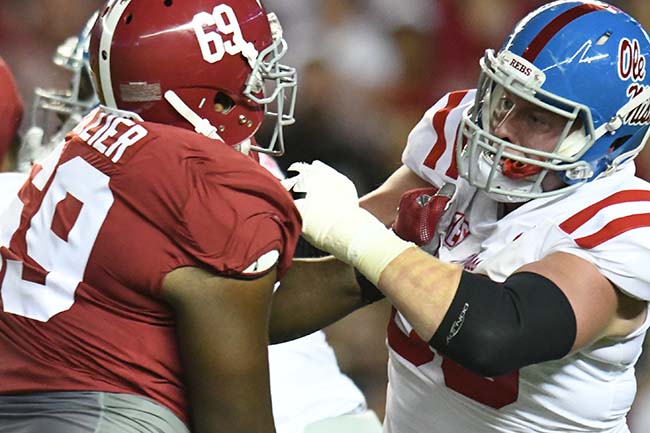 Ole Miss’ ability to protect its quarterback will get its biggest challenge against Texas A&M.

The Aggies enter Saturday’s game at Vaught-Hemingway Stadium leading the SEC with 33 sacks. The pressure has come from everywhere in third-year coordinator John Chavis’ defense.

Defensive end Landis Durham leads the Aggies and is tied for third in the SEC with 7.5 sacks. Otaro Alaka is next with five sacks from his linebacker spot. Jarrett Johnson has 4.5 sacks off the edge opposite Durham while Tyrel Dodson also has 4.5 sacks from the second level.

“They don’t have a weakness up front on the d-line,” Ole Miss interim coach Matt Luke said. “All those guys are solid and get a bunch of sacks. They do a lot of movement and stemming.”

Ole Miss has allowed 25 sacks, fifth-most in the league. The transition at quarterback from the injured Shea Patterson to the more mobile Jordan Ta’amu hasn’t mattered much as the Rebels have allowed six of those sacks since Ta’amu took over as the starter three games ago.

The best way for Ole Miss’ offensive line to combat A&M’s speed and athleticism up front, Luke said, is to keep the Aggies guessing with a running game that’s averaging more than 183 yards a game over the last five games. Jordan Wilkins is averaging 6.2 yards per carry and 6.6 in SEC games.

The objective, Luke said, is to stay out of predictable downs and distances.

The Aggies have been able to parlay their pressure into turnovers. A&M has 17 takeaways, second-most in the SEC, with nine of them being interceptions. It’s another reason Ole Miss wants to stay ahead of the chains Saturday, a task easier said than done against A&M’s opportunistic defense.

Guard Alex Givens, who has been in concussion protocol since last week, went through Wednesday’s full-contact practice and will play against the Aggies, Luke said. Defensive linemen Austrian Robinson (bruised lung) and Ross Donelly (knee) also practiced Wednesday and are in line to play Saturday.