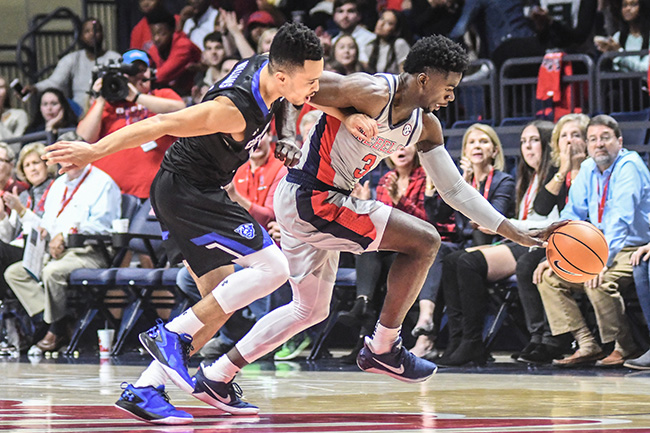 That’s easier said than done when going against the Panthers’ unconventional look, but the Rebels eventually followed their coach’s instructions.

Terence Davis led Ole Miss with 24 points while Markel Crawford added 15, helping Ole Miss hold off the Panthers for a 77-72 win at The Pavilion. The Rebels (3-0) only led for 12 minutes, 35 seconds but withstood the constant punches from Georgia State (2-1), specifically D’Marcus Simonds, who poured in a game-high 29 points before fouling out in a three-point game with 29 seconds left.

Georgia State had a chance on its next possession to tie it on Kane Williams’ 3-pointer after Deandre Burnett’s missed free throw, but the shot went long. Crawford, who went 9 of 10 from the charity stripe, hit four straight free throws down the stretch to salt away the victory against a Georgia State team picked in the preseason to finish second in the Sun Belt.

The game was part of the MGM Grand Main Event. Ole Miss will head to Las Vegas to begin the bracket portion of the tournament Monday at 11:30 p.m. CT against Utah with the winner advancing to play either UNLV or Rice in the championship game Wednesday.

Bruce Stevens added eight points and six rebounds for the Rebels, who didn’t have much of an answer for Georgia State’s 1-3-1 matchup zone or Simonds early. The Panthers built a double-digit advantage within the first six minutes and led throughout the first half with the Rebels playing passive against the unconventional defense, getting up just 14 shots, committing seven turnovers and finishing minus-7 on the glass in the first 20 minutes.

Simonds, last season’s Freshman of the Year in the Sun Belt, was the catalyst for the Panthers, finishing with 19 first-half points on 8 of 14 shooting. GSU led by as many as 12 in the first 20 minutes and held a 44-36 advantage at the break.

“We knew it was going to be that matchup (zone),” Kennedy said. “It’s kind of similar to what Georgia Tech runs, kind of an amoeba matchup. The biggest point is to try to disrupt you. … I thought we settled a little bit early, made some poor decisions and put ourselves in a hole.”

But Ole Miss started the second half on 10-0 run with back-to-back 3-pointers from Davis and five straight points from Crawford, whose breakaway dunk with 17:33 left gave Ole Miss its first lead at 46-44. The teams continued to go back and forth, but the Rebels switched to a 2-3 zone in the second half in an effort to limit Simonds’ ability to get to the rim.

Simonds still shot seven free throws in the second half but didn’t get as many clean looks at the basket, making just two of his last eight shots from the field. The Rebels also forced Simonds into seven of the Panthers’ 16 turnovers with Ole Miss scoring 20 points off those takeaways.

Jeff Thomas (14) and Devin Mitchell (11) also finished in double figures for Georgia State, but Ole Miss held the Panthers to 34.8 percent shooting in the second half, including just 23.2 percent (3 of 13) from 3-point range. The Rebels got aggressive on the other end in the second half, shooting nearly 47 percent from the field with half of their final 28 shots coming from inside the arc.

The Rebels got to the free-throw line 30 times and made 22 of them.

“They were swarming to the ball, but once we got comfortable with it, we were attacking and having success,” Davis said.

Watch Kennedy talk about the win in the following video.