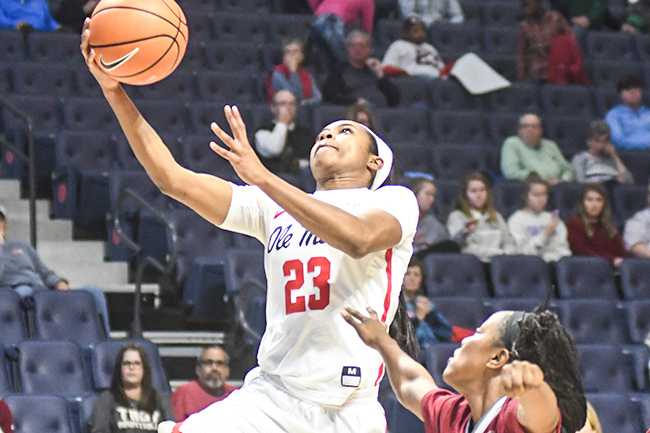 Offense is not an issue for Ole Miss. It is the inability to stop the other team from scoring that has caused concern for Matt Insell.

Through the first five games Ole Miss is averaging 87.4 points and needed all of them plus some on Tuesday afternoon.

The Rebels held off a late rally by Troy to defeat the Trojans 96-93 inside the Pavilion at Ole Miss. The win was the second in a row for Ole Miss (4-1), who suffered their first loss of the season last Friday at the hands of Saint Louis in a game played in Chicago.

A missed three-point try by Troy’s Kayla Robinson in the final seconds sealed the win for the Rebels.

Alissa Alston and Madinah Muhammad each scored a game-high 24 points. Shandricka Sessom finished with 17 and Promise Taylor chipped in 15 points.

With the offense doing its part in the young season the defense has struggled in recent games. After holding their first two opponents, Northwestern State and Kennesaw State, to an average of 53.5 points the Rebels have given up 73.6 points per game in the last three.

“It’s a unique style (Troy) plays and if you’re not locked in you struggle against that style,” Insell said. “Tonight we did not do a good job defensively nor rebounding. That’s some things we’ve got to correct and get better at, but I’m glad we got the win.”

“Mendoza made some threes on us,” Insell said. “She hadn’t been making them like that. Then (Amber Rivers) stepped out, hasn’t taken a three all year and goes three-for-three. It’s an interesting style, but we just stood around. We stood around when shots went up. Hopefully that’s a warning for our players.”

Last Friday’s game against Saint Louis was the first game of the season for Alston, who missed the first two games due to an injury. She scored seven points in her season debut and followed that up with eight points against Delaware State on Saturday.

“She was rusty in Chicago. She had some struggles up there,” Insell said. “I thought she started working her way back in here today. She was better today than she was in Chicago. She’s a good player. We’re glad to have her back.”

Ole Miss hits the road again this weekend with a trip to Philadelphia to play Temple (3-1) on Saturday at 1 p.m. CT.