‘This is what everybody wanted’: Players react to Matt Luke being hired as Ole Miss’ permanent coach 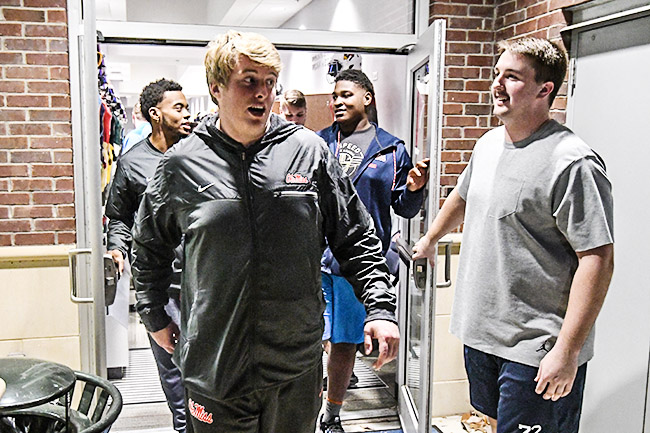 Ole Miss players leave the Manning Center after being told Matt Luke will be the team’s head coach, in Oxford, Miss. on Sunday, November 26, 2017. (Bruce Newman, Oxford Eagle via AP)

Ole Miss’ football players received a group text around noon Sunday telling them to be at the team meeting room inside the Manning Center that night for a mandatory meeting.

They had their suspicions as to what that meant but weren’t exactly sure.

“I was like, ‘It has to be something about either the (NCAA) allegations or it had to be about Coach (Matt) Luke and the job,’” safety Armani Linton said minutes after the meeting was over. “I was kind of nervous going into it because I didn’t know what to expect.”

Once there, the players waited about 10 minutes, running back D.K. Buford said, before athletic director Ross Bjork walked in the room. Bjork only added to the suspense when he began talking about a coaching search that’s been ongoing since Hugh Freeze abruptly resigned back in July amid a female escort scandal, hitting on the qualities he was looking for in the Rebels’ next coach with Luke, the Rebels’ interim coach, nowhere in sight.

“The way Ross approached us, we thought, ‘Oh man, we’re about to bring in a new head coach,’” Buford said.

But at approximately 8:30 p.m., Luke walked in, which meant only one thing for a group of players who ended their Egg Bowl celebration in the visitor’s locker room at Davis Wade Stadium three days earlier by joining in a unified chant of “We want Luke”: Their wish for Ole Miss’ next permanent coach had come true.

“It was just crazy,” Linton said. “Everybody jumped up. Everybody started clapping.”

Ole Miss officially announced the removal of the interim tag from Luke’s title with a post to its Twitter account a few minutes later. A press conference was held today at 11:30 a.m.

Linebacker Detric Bing-Dukes said the Rebels were “fighting hard” for Luke against Mississippi State, Luke’s final audition for the permanent job, but players said it was the way Luke approached a tumultuous season from the very beginning that started putting them in his corner, which made them and their watery-eyed coach equally grateful for their new reality Sunday night.

“He was just saying he kind of couldn’t of done this without us, but I feel like if it wasn’t for him keeping us together as a team and telling us to love one another and play for one another, we kind of wouldn’t have been where we are today,” Buford said.

Freeze’s ouster threw Luke into his first-ever head coaching job just a few weeks before training camp began in August and came five months after the school self-imposed a bowl ban for the 2017 season as part of its response to the NCAA’s probe. But players credited Luke’s passion and motivation for keeping them going even after a three-game losing streak against their first three Power Five opponents, the last two coming to SEC West frontrunners Auburn and Alabama by a combined 84 points.

The Rebels snapped their skid the following week against Vanderbilt and stabilized from there, never winning or losing more than two straight games the rest of the season. It ended with an upset of the 14th-ranked Bulldogs to get the Rebels to .500 on the year.

“When the things happened with Coach Freeze and he started talking to us and going through fall camp with him, you could just sense there was just something different about him,” Linton said. “From that moment on, you just knew that he cared. Not saying Coach Freeze didn’t, but at the same time, it was a different feeling. He just made you want to play for him. As a player, that’s the type of coach you look for — someone that’s going to motivate you to come do your job every day.”

Said Metcalf, “He wasn’t backing down from anything. Everything he stood on was about winning and making this program better.”

Yet it’s only a season-long sample size for Luke, who was the Rebels’ offensive line coach the previous five seasons and previously served stints as an on-field assistant at Murray State, Tennessee and Duke. Is Luke’s lack of head coaching experience while competing in arguably the nation’s toughest conference a concern for his players?

“Not at all,” Linton said. “I know I have a coach that loves this university, loves his players and is willing to do anything to make sure we succeed as a team and succeed as young men off the field. That doesn’t really bother me. If anybody watched any game this season and you look at the way we played, you wouldn’t think he had a lack of experience as a head coach.”

There’s also the NCAA’s Committee on Infractions’ final ruling the school is still waiting on that could result in more sanctions, but players said they wouldn’t want to move forward with any other coach.

“This is what everybody wanted because we feel his passion and how he likes us,” Metcalf said. “Every decision he makes is for us, so this is the coach we wanted.”

Said Bing-Dukes, “He’s a perfect fit for this university and we fought for him. We’re happy that it fell through.”