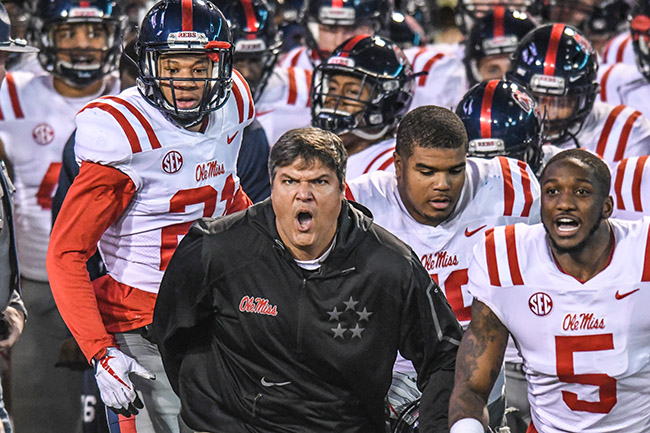 It didn’t take long for Ole Miss’ players to start their campaign.

In the minutes following the Rebels’ upset of rival Mississippi State on Thanksgiving night, the chant boomed repeatedly from the visitors’ locker room at Davis Wade Stadium: “We want Luke!” It continued on social media with many players tweeting in support of their interim coach.

As Ole Miss searches for its next football coach, they have made it clear they don’t want athletic director Ross Bjork looking too far.

“We would really be upset if he’s not (the permanent coach),” receiver A.J. Brown said. “We love that guy. We want him to be our head coach. Period.”

Only Bjork knows how serious of a candidate Luke is for the permanent gig, but Luke at least stabilized a program in turmoil in his first season as a head coach. Ole Miss’ offensive line coach the previous five seasons, he was thrown into it just a few weeks before the Rebels began training camp in August following Hugh Freeze’s abrupt resignation amid a female escort scandal, taking over a program facing a bowl ban as part of the NCAA’s investigation.

Ole Miss won its first two games before losing three straight against Power Five opponents, including setbacks to Alabama and Auburn that came by a combined 84 points. The Rebels stopped the bleeding with a win over Vanderbilt before the next bout of adversity came when quarterback Shea Patterson suffered a season-ending knee injury seven games in. Ole Miss never had winning or losing streaks longer than two games the rest of the way en route to a 6-6 record.

It could’ve been better. The Rebels blew a 31-7 lead in a one-point loss to Arkansas, the Razorbacks’ only SEC win this season. It also could’ve been worse as Ole Miss drove for a game-winning touchdown on its final possession at Kentucky that prevented another three-game losing streak.

Through it all, players said they grew to see different sides of Luke amid a difficult situation.

“The love he has for us,” Brown said. “We’ve been through so much as a team. We can talk to him. We can come in his office and talk to him any time we want. It’s little small stuff. He’s always there for us whenever we need him. Not even with football. We can call him about life problems, and he’s always going to be there for us.”

Said running back Jordan Wilkins, “We rally around him and we love him.”

His enthusiasm for the job has also been apparent to the players he’s coached. A center for the Rebels from 1995-98, Luke, whose father, Tommy, and brother, Tom, also played at Ole Miss, has spent 14 years as a player or coach at the school.

“There’s not a single person out there that has more love and passion for this team and this program than Coach Luke,” quarterback Jordan Ta’amu tweeted Friday. “Wouldn’t want to play for anyone else.”

Luke has consistently brushed off questions about how realistic of an option he believes he is for the permanent job, but he’s seen and heard his players’ pleas. It’s part of a season he’ll cherish even if it turns out to be his only one at the helm.

“After all we’ve been through, it brings you closer together. We developed a tight bond,” Luke said. “This a very tight-knit team. I’m grateful to those guys.

“I don’t have any regrets. It’s a dream of mine. Just thankful to have the opportunity.”