Why did Ole Miss hire Matt Luke after a national coaching search? 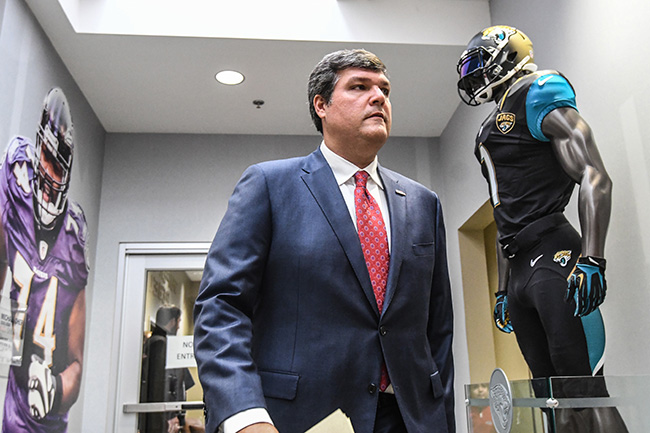 Matt Luke is introduced as the new head coach at the University of Mississippi during a press conference at the Manning Center, in Oxford, Miss. on Monday, November 27, 2017. (Bruce Newman, Oxford Eagle via AP)

Ole Miss athletic director Ross Bjork spent the last few weeks traveling around the country to talk to eight candidates about the Rebels’ head football coaching vacancy — a position held down for a season by interim coach Matt Luke.

Yet, Bjork’s search ended Sunday where it began when he and Chancellor Jeffrey Vitter removed Luke’s interim tag and officially introduced him as Ole Miss’ permanent head coach Monday.

Luke interviewed with Bjork for three hours on Friday and again Saturday morning, laying out the most thorough plan for success of all the candidates, Bjork said. That included changing the culture of a program that lost former coach Hugh Freeze amid an escort scandal, served a bowl ban this season as part of the self-imposed sanctions stemming from the NCAA’s investigation and is still awaiting word on any more possible sanctions from the Committee on Infractions.

“His tough-minded, no-nonsense attitude, his blue-collar approach and his non-stop, year-round work ethic is exactly what we need for our program,” Bjork said.

Luke’s improbable success in the face of adversity

Despite it all, Luke was able to lead the Rebels to a 6-6 record — one game better than last season when Ole Miss was playing for more than just pride. The Rebels withstood an early three-game losing streak to level out, never winning or losing more than two straight games over the final weeks. Ole Miss got to .500 with its 31-28 upset of then-No. 14 Mississippi State on Thursday, showing the kind of resolve that resonated with Luke’s bosses.

“He’s demonstrated in a tough environment that he can rally a team, a program and a university when we needed him the most,” Bjork said.

Bjork also wanted someone that was used to winning and could kill it on the recruiting trail, items he said Luke also checked off the list.

A center for Tommy Tuberville’s Ole Miss teams from 1995-98, Luke was part of 25 wins and played in a pair of bowl games for the Rebels. He returned to Ole Miss in 2002 for his first stint as an on-field assistant with the Rebels and was a part of two bowl wins in four seasons, including Ole Miss’ victory over Oklahoma State in the Cotton Bowl to conclude a 10-win season in 2003.

During his time as Tennessee’s tight ends coach under David Cutcliffe from 2006-07, the Volunteers went 19-8 and won an SEC Eastern Division title. He then spent four seasons as the offensive line coach at Duke, where he directed a line that blocked for one of the ACC’s top passing offenses.

Luke was a part of 39 wins, two New Year’s Six bowls and a Sugar Bowl victory while on Freeze’s staff the previous five seasons. His line led the way up front for the most prolific offense in program history in 2015 when the Rebels set school records for scoring (531 points), touchdowns (68), total offense (6,731), passing yards (4,351) and passing touchdowns (35).

“I’ve been playing and coaching at this level for 20 years,” said Luke, who’s set to make a base salary of $3 million in 2018 as part of his four-year, $12.6-million contract. “I’ve been under some of the best head coaches in this country, and I fully understand what a championship team looks like.”

Said Bjork, “He knows the necessary ingredients for winning football. He knows what it looks like and what it feels like.”

On the recruiting trail

Recruiting has always been a strength of Luke’s.

He doubled as Tennessee’s recruiting coordinator while in Knoxville, helping the Volunteers land a top-5 signing class in 2007. He took the lead on some of Ole Miss’ top offensive linemen signees when coaching the position, helping the Rebels ink former five-star prospects Laremy Tunsil and Greg Little along with former four-star recruits Javon Patterson and Rod Taylor. Luke was ranked the nation’s eighth-best recruiter last season by 247Sports.com.

The uncertainty of what’s still to come in the long-running NCAA probe is making Ole Miss a tougher sell with elite prospects — the Rebels’ class is 75th nationally, according to 247Sports’ composite rankings — but Bjork and Vitter like Luke’s chances of improving on that.

“Coach Luke’s passion for the game and more importantly his passion recruiting and developing young men in a university setting are truly exceptional,” Vitter said. “When you combine those passions with a proven ability to win, you have a very special football coach.”

In the end, there wasn’t much Bjork and Vitter didn’t like about the man they picked to be the 38th coach in program history.

“I realize the easy decision was to hire someone new. Bring in a splash hire, a big name if you will,” Bjork said. “In reality, the hard decision was to drill down, assess our program, what it needs, be strategic and hire the right coach. In the final analysis, Matt Luke is the best person, the best leader and the best coach.”