Was part of Leo Lewis’ testimony at Ole Miss’ COI hearing payback for one of Hugh Freeze’s recruiting decisions? 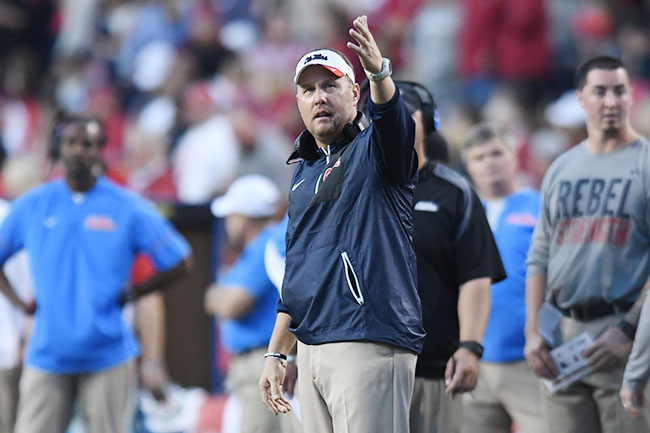 A day before the NCAA is scheduled to issue its final ruling in Ole Miss’ infractions case, a report from SBNation.com revealed new details about the testimony of Mississippi State linebacker Leo Lewis, who told the Committee on Infractions at Ole Miss’ hearing in September that he was paid $10,000 by Calvin Green, the father of Mississippi State teammate Farrod Green, before signing with the Bulldogs in February 2015.

Was that testimony a form of payback for the Rebels’ decision not to recruit Green heavily out of high school? Former Ole Miss coach Hugh Freeze reportedly thinks so.

According to a story published by RebelGrove.com on Thursday, Freeze interrupted Lewis’ testimony at that point to inform the panel that Calvin had once told him that he and Ole Miss would pay for not offering a scholarship to Farrod, a consensus three-star tight end prospect coming out of Wesson Attendance Center in 2015. Freeze said then he believed Calvin, the defensive backs coach at Copiah-Lincoln Community College, meant his son would make Ole Miss pay on the field but questioned Calvin’s motives upon hearing Lewis’ testimony, according to the report.

Lewis is at the center of multiple Level-I allegations that were levied against Ole Miss during the NCAA’s long-running investigation, alleging he received free apparel from Rebel Rags, an Oxford-based retail clothing company, and as much as $15,600 in payments from Ole Miss boosters during his recruitment. SBNation reported Farrod was interviewed by the NCAA about Lewis’ recruitment by Ole Miss and that his statements were used to corroborate Lewis’ claims.

Leo Lewis claims he was paid by Mississippi State…