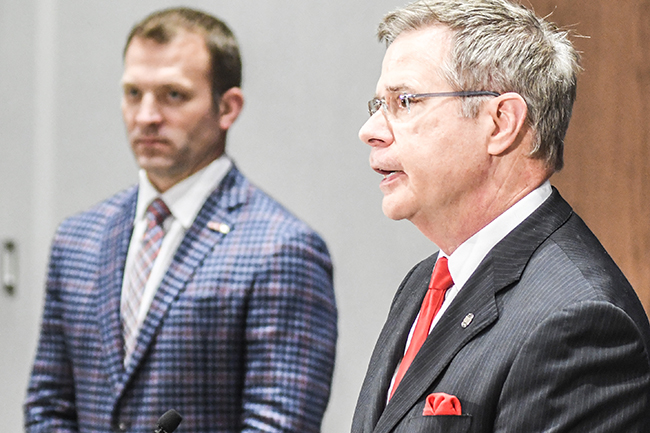 Ole Miss learned its long-awaited fate in the football program’s NCAA infractions case Friday, which included another bowl ban for the 2018 season and more scholarship reductions.

But it’s still not over, and it may be a few months if not longer until it is.

Ole Miss will appeal the Committee on Infractions’ final ruling, specifically the additional bowl ban and the charge of a lack of institutional control — one of 15 Level-I allegations and 21 total levied against the program in the amended Notice of Allegations the school received in February. Athletic director Ross Bjork said whether other aspects of the ruling, which include four years probation running concurrent with current probation period and a $179,797 fine, are also appealed is “to be determined.”

“We wish that this was over, but there’s more work to be done,” Bjork said. “That work has already started.”

LOOK: Ole Miss and the NCAA: An interactive timeline

Ole Miss has 15 days from the release of the NCAA’s ruling to file a written notice of its appeal to the Division I Infractions Appeals Committee, something Bjork said the school could have done by early next week. The school can make its appeal in writing only or also request in-person oral arguments in front of the appeals committee, something the school must indicate in its notice. Any evidence that wasn’t presented at the school’s COI hearing back in September cannot be added for oral arguments.

Once the appeals committee receives the notice, Ole Miss has 30 days to file its initial appeal. The panel then has 30 days once it receives the appeal to issue its response before the school gets 14 days to submit a rebuttal if it chooses. The same timeframes exist for anybody involved in the case that wants to appeal individual penalties.

An appeal is not a second chance for Ole Miss to argue its case but rather an opportunity for the appeals committee to reverse or modify the COI’s ruling. In order for that to happen, the school or individual must prove the parts of the ruling it’s contesting were contrary to the evidence, that it didn’t break any rules, there was a procedural error that caused the COI to find a violation or that the penalty was excessive.

Bjork said there were “many factors that call into question the procedures of this case and the credibility of evidence that was presented at the (COI) hearing” and that the school plans to “restate those facts in our appeals materials.” Specifically, Bjork and chancellor Jeffrey Vitter said the tone of the investigation changed during the spring and summer of 2016, a point at which both claimed the NCAA quit engaging in cooperation and isolated the school.

It was that April that former offensive lineman Laremy Tunsil claimed at a post-NFL Draft press conference he took money from a coach at Ole Miss, essentially re-opening an investigation four years in the making at that point. Mississippi State linebacker Leo Lewis, who became the NCAA’s key witness after being given limited immunity from possible sanctions at MSU in exchange for truthful accounts of his recruitment by Ole Miss, was first interviewed by the NCAA in the summer of 2016.

Lewis’ testimony resulted in multiple Level-I charges against Ole Miss, but the school argued a lack of consistency in that testimony over the course of three separate interviews the NCAA conducted with Lewis, including varying details about free merchandise he allegedly received from Rebel Rags and thousands of dollars worth of alleged cash payments made to him by an Ole Miss booster.

Bjork said he was “shocked” that the COI and the NCAA’s enforcement staff found credibility in Lewis, who also reportedly claimed to receive money from the father of an MSU teammate. While Vitter said Ole Miss was shut out of the NCAA’s dealings with Lewis, SBNation.com reported that former Mississippi State coach Dan Mullen met with Lewis a few months before the NCAA began investigating his recruitment to discuss Lewis’ recruitment by both schools.

“We strongly disagree with the tactics used by the enforcement staff to keep us isolated in the final months of the investigation,” Bjork said.

Vitter said the COI’s ruling was “clearly an excessive punishment” after Ole Miss previously self-imposed a bowl ban for this season, 11 scholarship reductions over a four-year period and three years of probation in response to the school’s amended Notice of Allegations while also disassociating many of the 14 boosters involved in the case.

Ole Miss will get one last chance to see if anyone involved with the NCAA agrees.