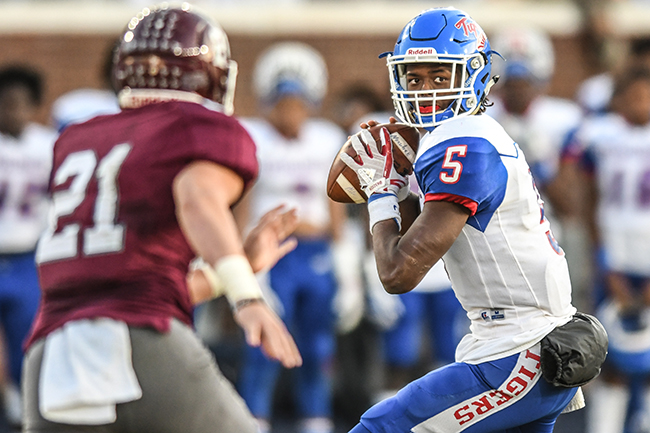 When the season began Armoni Clark was not the starting quarterback for Noxubee County. On Saturday night he led the Tigers to a fifth state championship.

Clark threw for 472 yards and three touchdowns while rushing for seven yards and a touchdown to be named the most valuable player of the game.

“I just want to cherish this moment, playing with these guys,” Clark said. “We’ve been through a lot but we came out with the win.”

It was an emotional win for Noxubee County after losing offensive coordinator James Patterson to cancer back in March. Patterson had coached the Tigers for 37 years.

“He would have said job well done,” Clark said when asked what Patterson would have thought. “This was dedicated for him. When the season first started we said this championship would be ours. So, we just came out just gave it to them.”

It was not elation on Noxubee County’s sideline at the onset of the game. East Central — and more specifically Tony Brown — put the Tigers in a 28-14 halftime deficit.

Brown, who came into the state championship game after dominating the south half portion of the playoffs. Coming off games of eight and six touchdowns, respectively, Brown added two more to his season total in the first half.

The complexion of the game changed late in the second quarter when Brown suffered a dislocated shoulder and was stretchered off the sideline and taken to the hospital. He finished the game with 108 rushing yards and two touchdowns.

The Tigers outscored East Central 27-7 in the second half.

It was a contrast of styles with Noxubee County being dominant through the air with nearly 500 yards and East Central controlling the ground game, rushing for 414 yards.

Tigers receiver Rashed Eades had a game-high 219 receiving yards and one touchdown. Cameron Gray was the Hornets leading rusher with 202 yards and a touchdown on 13 carries.