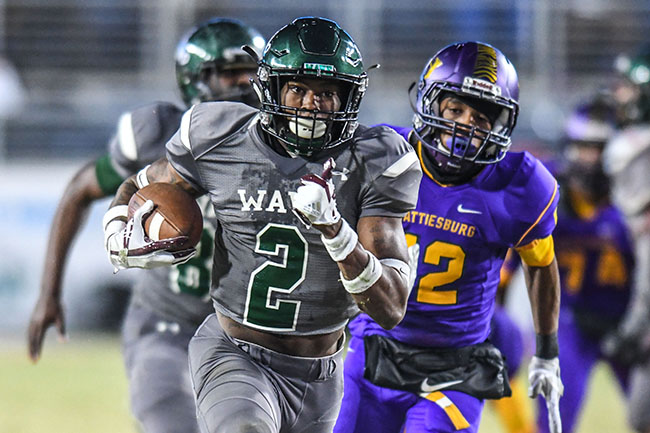 There was never any doubt. West Point has been the king of Class 5A football for quite some time.

On Saturday the crown was never in danger as the Green Wave defeated Hattiesburg 41-15 in the Class 5A state championship at Vaught-Hemingway Stadium.

The championship is West Point’s second straight 5A state title — ninth state championship overall —  and pushes their winning streak to 28, dating back to Sept. 9, 2016.

Marcus Murphy rush for 226 yards and four touchdowns on 23 carries. He also completed seven of nine passses for 81 yards to be named the most valuable player of the game.

Chris Calvert provided the second of a one-two punch for the Green Wave (15-0), rushing for 103 yards and two touchdowns on 19 carries.

It did not take long for West Point to insert their dominance, scoring a touchdown on the opening drive of the game off a Murphy 15-yard run. They scored on their next drive when Murphy scorched the Hattiesburg defense for a 54-yard run to put the Green Wave up 14-0 in the first quarter.

Hattiesburg responded with a two-yard run by Jarod Connor in the second quarter to make it a one-score deficit, for the moment.

After a turnover on downs and a punt on their next two drives West Point put it in another gear, scoring touchdowns on their next four drives.

Connor finished the night with 248 yards and three interceptions. He also rushed for 25 yards and two touchdowns on 15 carries.

Connor’s second touchdown of the night came with 54 seconds left in the game when he ran in from six yards out. Darius Ruffin scored on a pass play for the two-point conversion for the final margin.