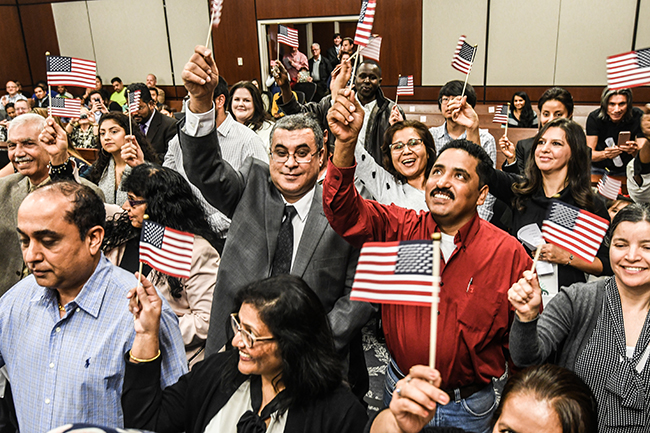 Mohammad Deya, originally from northwest Africa, has lived in the United States for seven years but on Friday he could officially call America his country.

Deya joined 34 people originating from 19 different countries who took the sworn oath of citizenship during a naturalization ceremony at the U.S. District Court.

“I love this country,” Deya said after taking his oath. “This is very important. It’s a big day.”

“I know, for you and your families, this is a very important day in your lives,” Aycock told the new citizens. “It’s also always an important ceremony for us. We don’t always have a chance to rejoice in this courtroom. It’s a special day for our staff, judges and employees as well. I know you all worked very to get to this day.”

Prior to being sworn in, David Crews, clerk of the court, instructed the soon-to-be new Americans on what to expect during the ceremony and how to line up when their name is called. Michi Guess – who became a citizen in 2008 – sang the national anthem.

Oxford Mayor Robyn Tannehill was the guest speaker and welcomed the inductees and their families and reminded them that with their new rights as American citizens comes new responsibilities.

“You still have a demanding, and rewarding task,” she said. “You now have to help us write the next great chapter of America’s history.”

Tannehill encouraged the new citizens to get involved in their communities, volunteer, serve on a jury when asked and to vote.

“Vote in every election you can – local, state national,” she said. “It’s you’re right and now, your duty.”

Tannehill told the 34 new citizens to never forget where they came from, but to celebrate their new citizenship.

“You are just as American as your next-door-neighbor, or someone who chased their lineage to Jamestown,” she said. “In fact, you’re now Americans by choice and not by coincidence of your birth.”

Aly Kle has been in America since 1996 and has worked on becoming a citizen for a few years.

“I am just very happy to be a United States citizen, very happy,” said Kle, who now lives in Horn Lake. “I liked to come here to get a better life and I have a better life now.”

For Raj Prabhu and his family, Friday marked a major milestone. Originally India, Prabhu lives in Starkville and is a professor at Mississippians State University. He has lived in the U.S. For 15 years.

“I decided this was the right place for me to live,” he said in regards to applying for citizenship. “The process took about a year. This is the day I get to call my home the home of the free and the brave.”

Prabhu’s wife, Larisha, said she’s very proud of her husband. She and their three baby girls attended the ceremony Friday. “He’s worked very hard and I know he will offer a lot to his new country.”