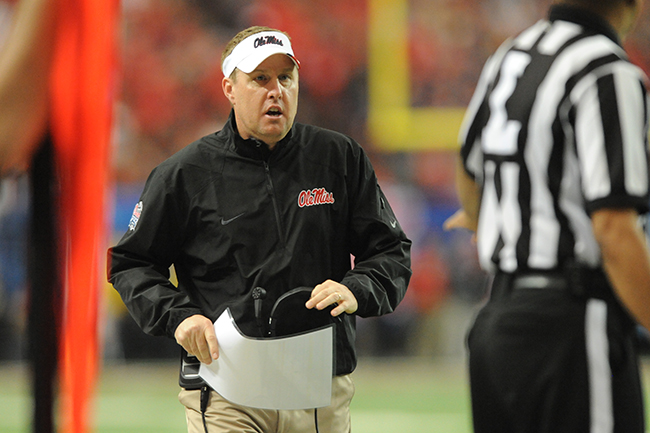 Hugh Freeze isn’t willing to talk about exactly what led to him being out of coaching, but he’s vocal about his desire to get back in it.

The former Ole Miss coach is looking for his next job after his fall from grace in Oxford, one that ended abruptly this summer amid scandal after a five-year stint that included two wins over Alabama, back-to-back New Year’s Six bowl games and the program’s first Sugar Bowl win since 1960. A call placed to a female escort service popped on an open-records request of Freeze’s university-issued cell phone made by Houston Nutt’s attorney, Thomas Mars, leading to what Ole Miss athletic director Ross Bjork called the discovery of a “concerning pattern” of personal misconduct and Freeze’s resignation in July.

In a series of interviews with GridIronNow.com, Freeze said he’s “open to anything to be back around a team” but “what makes the most sense” is to return to coaching as an offensive coordinator. In handing down penalties in Ole Miss’ infractions case, the NCAA dealt Freeze a suspension of the first two conference games next season should he be hired as a head coach somewhere else, but if he’s hired as an assistant, there’s no penalty.

Freeze told the website “Saturday is the most difficult day” of the week when going through a season without coaching.

“I get into an almost depressed mode and then I have to pray and fight through that,” Freeze said. “I kind of get by myself, don’t want to be around anybody.

“I really believe I have a lot to offer a program whether as an assistant or a head coach, and I’m hopeful it’s very soon. That program will get a very determined, motivated, better Coach Freeze if given a second chance.”

As for the details of his transgressions, Freeze said he’s keeping those private out of respect for his wife and his three daughters, Ragan, Jordan and Madison.

“I don’t think I owe anyone the details,” he said. “I made a series of poor decisions that didn’t honor my wife. In 2016, on a couples’ retreat with my two closest friends, I acknowledged my shortcomings and confessed that to them and said, ‘This is now who I want to be, and I will try to hold me accountable to a higher standard in this area of my life.'”

Freeze admitted the naysayers that questioned Ole Miss’ sudden success on the recruiting trail and on the scoreboard throughout his tenure got to him, calling it a “distraction.” Eventually, he said, he became someone he didn’t recognize.

“They attack you first and you’re guilty first, and the enemy used that against me to fuel this fire in me to try to please people or to worry about my image or to worry too much about my image,” Freeze said. “And then we win, and we go to two New Year’s Six games, we beat Alabama, we beat LSU, we beat Texas A&M, we beat Texas, we beat Georgia — things that Ole Miss is not supposed to do and, man, the soulness of a bad type of pride or ego or whatever you want to call it, that starts to slip in without you even really knowing it.”

Jill said the last year has strengthened the couple’s marriage and that she believes her husband’s shortcomings will help make him a better coach at his next stop, telling the website, “He has even more passion to coach in order to invest in his players’ and staff’s lives and be a positive influence on them. I believe he will be more successful with his second chance because now he will seek to serve in God’s strength and not his own.”

But Freeze knows he still has to regain trust along the way.

“I feel the biggest misconception about me is that there are parts of me that are not genuine, and really that in some way I have portrayed myself as having it all figured out,” Freeze told the website. “Neither of those could be further from the truth. I’ve always said when I speak, ‘I’m just a fellow struggler.’ But man, I genuinely love my players, love what I do, love my family. My faith is genuine — imperfect but genuine.”