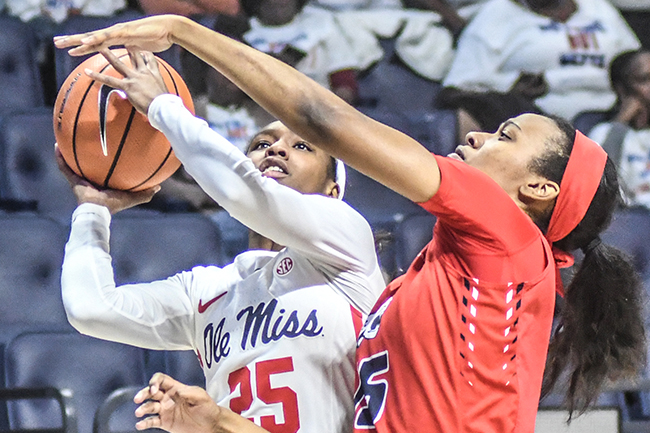 It was exam week for Ole Miss and if head coach Matt Insell had to give a final grade on his team’s performance on Saturday it would barely earn them a passing mark.

“We had a D game,” Insell said. “Hopefully we wasted all our As on final exams and took our Ds in this game.”

Alissa Alston scored a career-high 27 points to lead the Rebels past South Alabama 66-59 inside the Pavilion. It was the sixth win in a row and kept Ole Miss perfect at home with a 6-0 record.

It was an offensive showcase in the opening quarter with South Alabama taking a 25-22 lead after the first eight minutes. It was the most points Ole Miss (8-1) has allowed in an opening quarter this season.

The momentum swung late in the second quarter when the Rebels used a 12-2 run in the final 3:21 of the half to take a lead into halftime. Ole Miss scored the final eight points of the quarter and did so without freshman forward Promise Taylor on the floor the entire second quarter.

The reigning SEC Freshman of the Week picked up her second foul in the final seconds of the first quarter and sat all of the second. Taylor finished with six points and five rebounds.

“We were just out of it a little bit there,” Insell said of the start. “It was a huge stretch in the second quarter. Thought we played well in the third quarter.”

South Alabama (5-3) trailed by as many as nine points in the third quarter but used a 8-2 run of their own in the final minutes to make it a two-point lead for the Rebels.

The fourth quarter was not pretty for either team as they shot a combined 17.8 percent (5-of-28) from the floor and committed 12 turnovers. Ole Miss outscored them 12-7 to hold on for the key RPI win.

Freshman guard Chyna Nixon got her second straight start, replacing the injured Shandricka Sessom and scored a career-high 10 points, besting her eight points she scored against Deleware State on Nov. 18. Madinah Muhammad finished 2-of-15 from the floor but hit nine of 10 free throws to finish with 13 points.

Alston was one missed layup from having a perfect night. She went 10-of-11 from the floor to eclipsed her previous career-best of 26 points she scored against Troy on Nov. 21.

Ole Miss has a quick turnaround, hosting Southern Mississippi on Tuesday at 11 a.m. for the annual ‘Kids Day’ game.