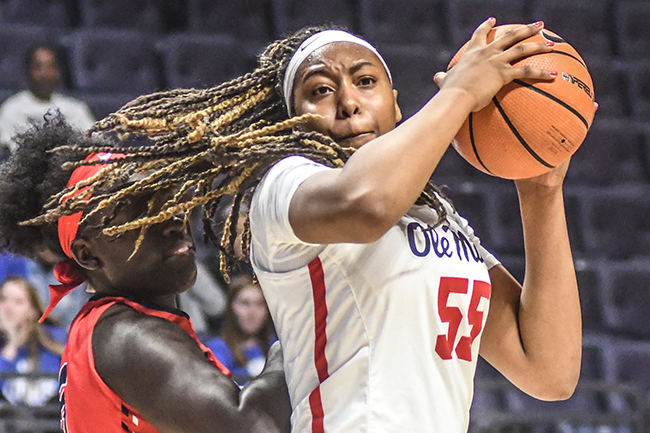 On Sunday mornings Promise Taylor goes to church with her head coach and his fiancé. She does not show up with them, she is already there before they arrive.

While she is waiting she pulls out her phone, not to silence it, but to get a few more minutes in of preparation for her upcoming opponent.

“Promise is unique. She’s a basketball junkie,” Ole Miss head coach Matt Insell said. “She’s got her iPhone out (before church) watching highlights from the night before or watching this post player or that post player.”

That is what Insell knew he was getting when he decided to begin recruiting the 6 foot-5 freshman. Taylor made a name for herself while at Sammamish High School in Issaquah, Washington. Her senior year she dominated the court averaging 23.8 points and 13.5 rebounds and 7.5 blocks her senior season. She also got noticed playing with the Lady Styles, an AAU team.

Taylor was a hot commodity with the likes of Oregon State, Dayton and rival Southeastern Conference opponent Missouri vying for her services. Instead, she opted to come to Oxford and 2,400 miles away from home. Thanks to a phone call her AAU coach put into Insell as the two are good friends.

“Because of the trust that her coach has in me and the trust her mom has with him I thought it was pretty clear cut once they realized we wanted her that this would be great place for her,” Insell said. “Mom knew she wanted to leave home, so her mom wanted her someplace that she knew her daughter would be taken care of each and every day.”

Issaquah is a town of a little more than 37,300 people 17 miles to the east of Seattle. Oxford is a town of roughly 28,000 and nowhere near a large city such as Seattle.

Adjusting was not as much of an issue for Taylor as some may think. There are obvious differences between a town in the Pacific Northwest and a town in the Deep South, but to Taylor they were differences that helped her settle in.

“The people are different,” Taylor said. “They’re quicker to talk to you. Like, if you’re walking down the street they’ll say hi to you and have a conversation. Nobody does that in Seattle”

Her comfortable level in her new town has transitioned over to the basketball court. Taylor has taken to the faster pace of collegiate basketball like a fish to water. It is only nine games into her first season and with zero SEC games under her belt, but she has excelled faster than she imagined.

In the first month of the season Taylor has won two SEC Freshman of the Week honors — including last week — and is the only repeat player to earn the honor this season. She has played, and started, in all nine games and averaging 11.4 points, 6.8 rebounds and three blocks a game. Against Arkansas State on Dec. 2 she recorded her first career double-double in just her eighth game.

“I definitely didn’t think that that was going to happen that fast,” Taylor said. “My coaches made it easy for me. They’ve helped me through everything.”

A big reason Taylor wanted to come to Ole Miss was sophomore Shelby Gibson. Taylor watched Gibson last season and wanted to come in and learn under her while she got her feet wet. The expectation was for Taylor to watch from the bench this season and rotate in with Gibson. What has happened instead is the complete opposite with Gibson coming in off the bench to provide minutes while Taylor rests.

“Shelby is a very talented player in that she’s mentoring a player underneath her that’s beat her out for the position,” Insell said. “They’re going to be a duo at the five-spot for the next three years that are as good as any duo in this league.”