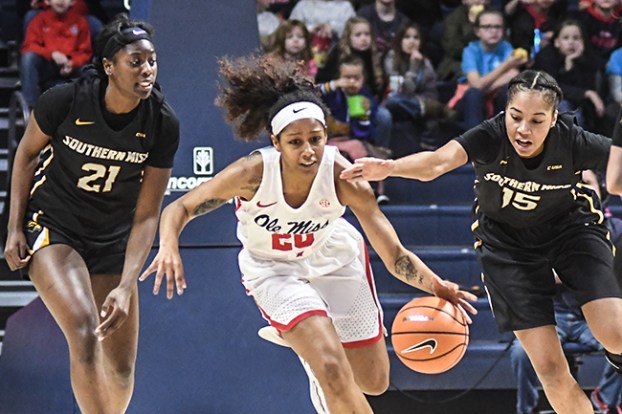 The game at times was as ugly as the Christmas sweater head coach Matt Insell wore but Ole Miss did just enough.

The Rebels defeated Southern Mississippi 68-59 in front of an announced record crowd of 8,229 in the annual ‘Kids Day’ game on Tuesday afternoon at the Pavilion at Ole Miss.

It is the seventh straight win for the Rebels (9-1), who improved their home record to 7-0. It is the second best start at home under Insell. Ole Miss started 11-0 at home last season.

Ole Miss did a lot of the work without Promise Taylor on the floor. The reigning SEC Freshman of the Week sat for 25 of the 40 minutes due to foul trouble early in the game. Taylor picked up her second foul four minutes into the first quarter and sat the rest of the first half.

She finished with seven points and seven rebounds.

Southern Mississippi (6-3) never led and the Rebels led by as many as 15 points but could never close the door. The Golden Eagles got as close as six points late in the fourth quarter but Ole Miss closed out with a 9-3 run in the final three minutes.

“I thought we had some individuals who decided that they didn’t care about guarding anymore,” Insell said. “We’ll go back and look at it on film and I’m sure they know who they are. You can’t get lackadaisical and start thinking about ‘how many points I can score.’ You think about how Ole Miss can improve. You have to guard every single possession. I thought we had some individuals who took plays off.”

Rodgers has missed the past four games after suffering a injury at Temple. Insell hopes to have her back after the Christmas break.

The Rebels took care of business by sweeping their current four-game homestand, but their biggest challenge of the season comes this weekend. Ole Miss heads to Eugene for rematch with No. 9 Oregon (8-1) on Sunday (3 p.m. CT) with a chance to pick up a Top-20 RPI win. Ole Miss defeated Oregon 83-67 at the Pavilion at Ole Miss last season.