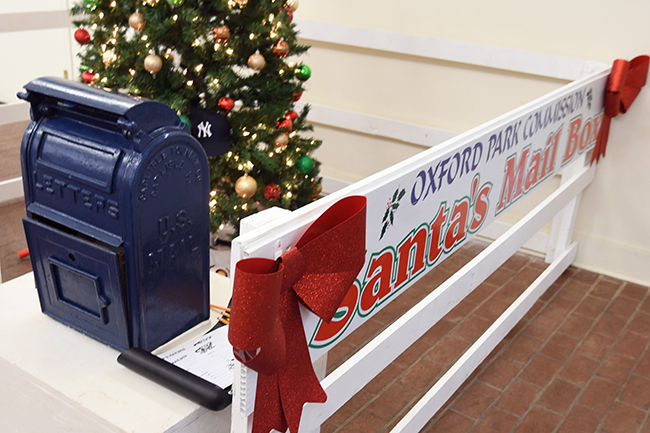 Getting letters to Santa is of the utmost importance to Oxford’s youngest citizens. Thanks to a mailbox designated just for the North Pole at the Lafayette County and Oxford Public Library, their letters are guaranteed to reach Ol’ St. Nick before he loads up his sleigh.

The special mailbox cuts out the middleman as letters are taken directly to Santa via a little Christmas magic and the assistance of Santa’s elves.

Santa has a special arrangement with the Oxford Park Commission to put the mailbox at the library each year.

However, little ones need to get their letters written quickly with Christmas just around the corner.

Deadline to drop off letters is Dec. 20.

Kids, with their parents, can drop off the letters they’ve written or take advantage of special Santa letter forms located next to the mailbox that can be filled out at the library.

Children will know Santa has received their letter when they receive a phone call from one of Santa’s very own helpers, who are also known to sometimes help out the Retired Senior Volunteer Program during the rest of the year.

“Santa’s helpers call the children and ask them if they’ve been good boys and girls, wish them a Merry Christmas and remind them to be good cause Santa is always watching,” said “Main Elf” and RSVP director Arledia Bennett.

Children will know their phone call is coming from the North Pole thanks to a special dedicated line that shows up as “The North Pole” on the caller ID.

Bennett said the elves make about 100 phone calls each year.

“It is magical and they enjoy hearing the excitement in the kid’s voices,” Bennett said.