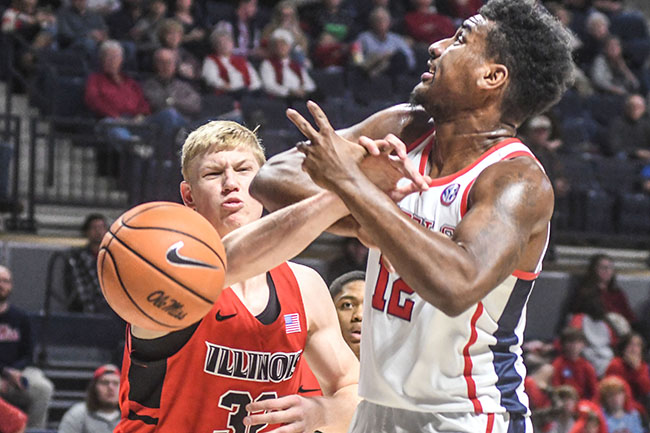 Bruce Stevens scored a career-high 27 points to lead five Ole Miss players in double figures, but it wasn’t enough to overcome more shaky defense Saturday as the Rebels fell to Illinois State 101-97 in overtime at The Pavilion. It was the third overtime loss in the last four home games for the Rebels, who also fell to South Dakota State and Virginia Tech in extra time.

“This is a disaster, and I’m responsible for it,” Ole Miss coach Andy Kennedy said.

The teams went to overtime tied at 87 and continued to go back and forth with Illinois State (5-6) holding a three-point lead with 48 seconds left. Ole Miss (5-5) had a chance to gain possession back when Terence Davis blocked Matt Hein’s 3-pointer, but the Redbirds came up with two loose balls before Hein got fouled and made a free throw with 12 seconds left as Illinois State held on despite two of its top three scorers, Milik Yarbrough (25 points) and Evan Fayne (16), fouling out in regulation.

Illinois State, which came into the game ranked 344th out of 351 Division I teams in rebounding margin (minus-10.2), pulled down 17 offensive boards and finished plus-8 on the glass. Yarbrough and Fayne each grabbed 10 rebounds to record double-doubles.

“It’s embarrassing for me, a man that’s put so much blood, sweat and tears into this program, to have to coach effort,” Kennedy said. “It’s ridiculous. But I’m coaching it every single day, and it’s the reason we’re sitting here at 5-5. We’ve got to get some ownership.”

Said Davis, “Any time you lose three overtime games in your own building, it’s kind of devastating.”

Ole Miss trailed by as many as 18 and faced a 12-point deficit with 12:19 left in regulation, but the Rebels chipped away before eventually taking an 81-80 lead on Markel Crawford’s free throw with 3:01 left to cap an 8-0 run. Davis scored 15 of his points in the second half and had a chance to score what would’ve been the winning basket with four seconds left but lost the ball out of bounds going up for a contested layup.

“We got the ball right to the ball-side block to the right hand. We’ve got to finish that,” Kennedy said. “We got it to our (preseason) first-team all-league player. Didn’t finish. … It’s our inability to make those plays.”

The same defensive issues were there from the start for Ole Miss, which began the day 279th out of 351 Division I teams in points allowed, 238th in 3-point field goal percentage defense and 184th in field-goal percentage defense. Illinois State broke the Rebels down off the bounce to either get shots close to the rim or kick out for open looks from 3-point range.

Illinois State, which led by as many as 18 in the first half, shot nearly 43 percent from the field and knocked down 13 of its 31 3-pointers. Ole Miss often tried to answer by going inside to Stevens, who went 7 of 9 from the floor and made 13 of 16 free throws in his third straight start.

But the Rebels again couldn’t get a stop or a bucket when they needed it the most.

“What is defense? Effort and angles,” Kennedy said. “That’s where it starts is effort and angles. Your effort has to be off the chart. Obviously you guys are questioning it as am I. I don’t think it’s as good as it needs to be with our angles and our communication.”

“We didn’t get beat by 40 three times. We’re right there. Our inability to make a play and to stop them from making a play has really been the deciding factor in our season to this point. If we can change that dynamic, then I think the results will change.”

Ole Miss will stay at The Pavilion on Tuesday against Texas A&M-Corpus Christi. Tip is set for 6 p.m.