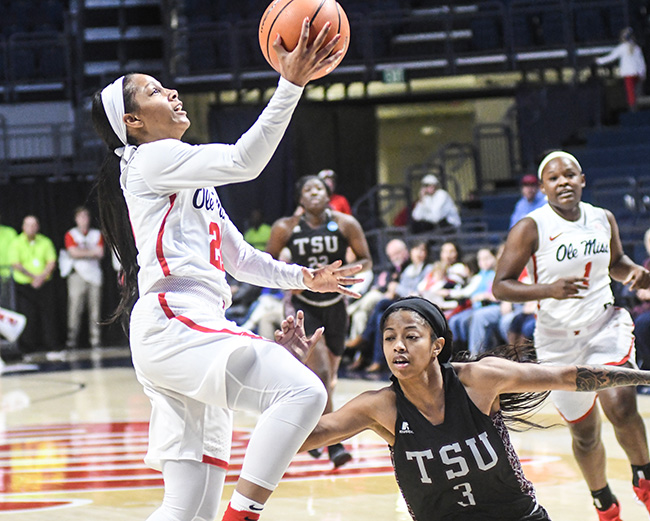 The Ole Miss women’s basketball team needed a bounce-back win in a big way and came away with a solid victory over Texas Southern, topping the Lady Tigers, 73-58, at The Pavilion at Ole Miss on Thursday afternoon.

The Rebels (10-3) improved to 8-0 at home this season and snapped a two-game losing streak with an all-around team win over TSU (5-6). This marks the fifth time in the five-year era under Matt Insell that the Rebels have won at least nine games in non-conference and the third time in the Insell era that the Rebels have won 10 or more. This is also the second-straight year that Ole Miss has started 8-0 or better at home (the 2016-17 squad started 11-0 at home).

“This is a good win for us,” Insell said. “Texas Southern is another team that was in the NCAA Tournament a year ago. We did not shoot the ball particularly well out of our main shooters, and I know they’re going to shoot the ball a lot better than what they shot it there. But we executed a lot better offensively and we were a lot better defensively, which is something that we harped on for the last two days of practice.”

Ole Miss started out hot, opening the game on a 12-0 run that ended with a 28-12 advantage by the end of the first quarter – the most by the Rebels since scoring 30 in the first quarter against Delaware State. The Lady Tigers responded by outscoring the Rebels 32-28 in the second and third quarters combined to make it a 56-44 game heading into the fourth.

Much of that had to do with the awakening of TSU’s Joyce Kennerson, who entered the day as the NCAA’s second-leading scorer at 26.1 points per game. After holding Kennerson scoreless in the first, she went on to score 24 points of the 46 total that Texas Southern scored in the final three quarters.

“(Kennerson) made some shots, but she went 7-of-20 from the field, and we’ll take that,” Insell said.

After getting beat on the boards and defensively the past two games, the Rebels adjusted with a tough defensive outing (making Texas Southern the eighth Rebel opponent this season held under 60 points) and a plus-6 advantage in rebounding. That rebounding total was helped greatly by a career-high 10 boards from Bree Glover, who earned her first career start.

Part of that was starting sophomore Shelby Gibson at center for the first time this season. Gibson led the scoring barrage, recording a career-high 20 points on 7-of-8 shooting and a 5-of-7 clip from the charity stripe in 25 minutes played. Gibson also chipped in with six rebounds.

“Shelby is an experienced player,” Insell said. “She’s somebody that’s played in this league, she’s somebody that knows what it takes to play at the level in the SEC. She’s been a proven player in our league, and I just told her when we got back from Christmas that it’s time for you to start playing again.”

Another important storyline from Thursday was the return of sophomore forward Kate Rodgers, who had missed the previous six games since suffering a sprained MCL at Temple on Nov. 25. Rodgers scored two points and hauled in four boards in just five minutes played.

“Kate is somebody that is one of our best rebounders that we’ve needed, and we haven’t had her,” Insell said.

With non-conference now in the rearview mirror, the Rebels look ahead to a grueling SEC slate beginning with a key road test at Arkansas on New Year’s Eve at 2 p.m.

“It’s going to be a good game,” Insell said. “I think they’re a lot better than where they were picked in the league, and I think we’re a lot better than where we were picked in the league. It’s an SEC road game, those games are tough. We’re going to have to play really well to get a win. We know that, and we’re prepared for that. We’ve challenged our team in the non-conference with good teams, and we’re excited for the opportunity to play a good Arkansas team.”