Ole Miss’ next opportunity comes from No. 4 South Carolina 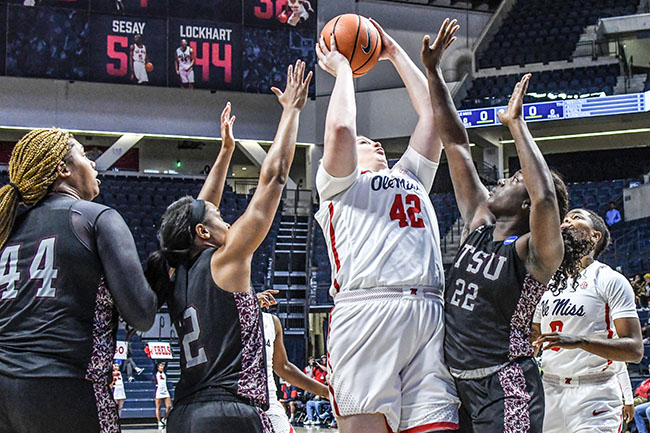 The first showdown with a Top-10 team did not go as planned for Ole Miss. In fact it could not have gone much worse in their Dec. 19 90-46 road loss at then-No. 10 Oregon.

“Oregon beat us twice,” Ole Miss head coach Matt Insell said. “I think that Oregon game beat us down. …our inexperience really showed at certain positions in that game and they were able to expose that.”

The loss started the Rebels most recent slide. They have lost three of their last four games after starting the season by winning nine of their first 10. The most recent loss was a 73-72 defeat at Arkansas on New Year’s Eve to open Southeastern Conference play.

Having the experience of going up against an elite team such as Oregon provides some knowledge to fall back on in preparing for the defending National Champions and not letting the moment be too big.

“I think they know that if they walk around out there you get your butt kicked,” Insell said. “It’s going to be unique the way we play. We’ve got to be very cautious of our scouting reports. We got to know who shooters are and who shooters aren’t.”

The biggest worry for the Rebels is know where A’ja Wilson is at all times. The six-foot-five senior forward has dominated the SEC her first three years with the Gamecocks. Wilson is South Carolina’s leading scorer, averaging 24.5 points per game. That is double the next best scorer in Ashley Spann (12.3 ppg).

In their meeting last January in Columbia the Rebels kept Wilson in check, holding her to six points and four rebounds in a 65-46 loss.

“Wilson is one of the top-12 players in the world. Not just college basketball,” Insell said. “She’s one of the ones who is going to be playing in the Olympics in 2020. She’s a tough, tough match up. I’m ready for her to graduate.”

Having lost the entire summer to work on her game due to an injury hampered Shelby Gibson’s game. The sophomore was not cleared until November at the very beginning of the regular season.

The time off the court was time she could get back in terms of practice and getting back into game shape. Now in the middle stretch of the season Gibson finally has her legs under her.

The past two games have seen the Murfreesboro, Tenn. native set career marks. Against Texas Southern on Dec. 28 Gibson scored a career-high 20 points in the Rebels’ win. Against Arkansas Gibson set a new career-high with 21 points against the Razorbacks. She is also averaging 3.1 rebounds a game.