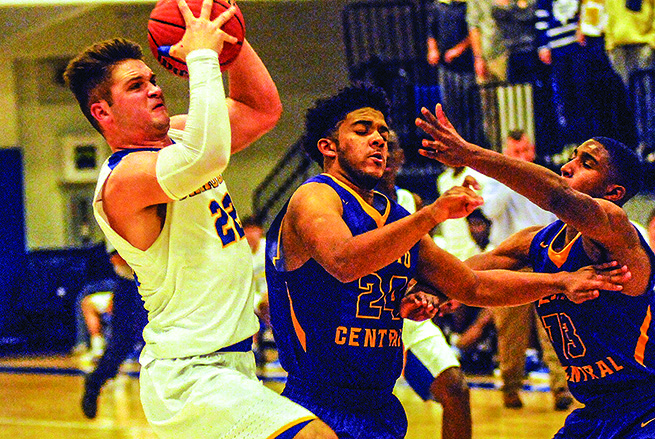 Drew Tyler inched closer to a milestone mark and the Oxford boys bounced back after facing their first adversity of the season in a 61-50 win over DeSoto Central at the Oxford High gym on Tuesday night.

It capped a split with the Jaguars with the Lady Chargers falling 52-34 in the first game of the doubleheader.

The Chargers (12-2) have been dominant on their home court the first half of the season and remained a perfect 6-0 at home with the win.

The victory also ended a two-game skid that Oxford suffered in Pigeon Forge, Tennessee at the King of the Smokies Tournament over the weekend. They were the first losses of the season.

“Tonight was our fourth game in six nights and we played some  of our best basketball in the Smokey Mountain Classic,” Tyler said. “One of our losses, we played some our best defense we played all year and that’s the style we played (Tuesday night). We were happy to get that effort from the holiday tournament and able to kind of fine tune some stuff tonight.”

After jumping out to a 17-8 lead through the first eight minutes of play, Oxford had to hold off a second quarter surge from DeSoto Central (5-12). The Jaguars outscored the Chargers 18-12 to cut the Charger’s lead down to three at halftime.

The second half was much better for Oxford, who outscored the Jaguars 32-22 in the final two quarters.

Tyler — who is in his 21st season as Oxford’s head coach — earned career win No. 499 and can notch win No. 500 on Friday when Oxford travels to Tupelo to open up Region 2-6A play.

“A 500th win in that column, it’s not about Drew Tyler,” Tyler said. “Oxford’s been good to me and I feel a loyalty there. Going to school here and putting in 25 years of teaching and 21 years as far as head coach. So, there’s definitely a bond there with Oxford basketball and Drew Tyler.”

Girls’ slide continues
The struggles for the Lady Chargers continued on Tuesday.

Oxford dropped their ninth straight game, falling to 2-13 on the season.

There were chances in the game for the Lady Chargers to pick up their first win since Nov. 28. They trailed DeSoto Central (6-12) by three at halftime.

The offense cooled for Oxford in the second half, scoring four points in the third quarter to the Jaguars’ 15. The deficit continued to grow in the fourth, extending the Lady Chargers’ losing skid.

“We’re really struggling scoring. It’s something that we’ve struggled with all year,” Oxford head coach Cliff Ormon said. “This season has not went the way we wanted. Myself, the players, none of us like it. Instead of us trying to work harder we’ve kind of let the season take over our mindset. We’ve got to get back to working, more effort. Times are tough but you can always improve.”

Ashley Cook scored a game-high 15 points for Oxford and was the only Charger in double-figures. Bri Ducksworth scored six points and Christina Owens added three points.

Oxford will begin Region 2-6A play on Friday at Tupelo with the girls playing at 6 p.m. and the boys to follow.