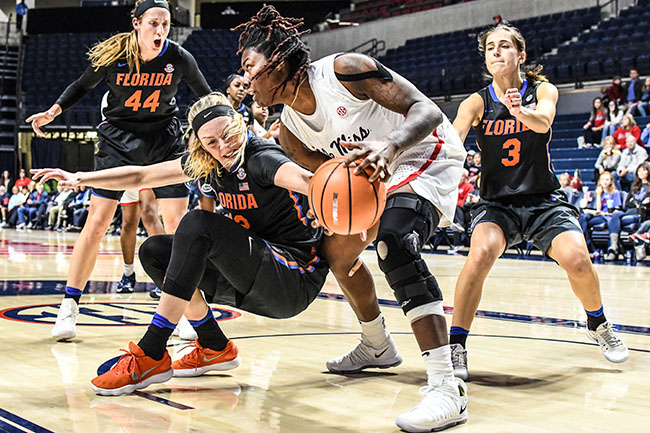 Dropping their first two Southeastern Conference games last week the Rebels were in dire straights heading into Sunday’s game with a struggling Florida.

The Rebels got their wish, thought it took 10 extra minutes, defeating the Gators 78-75 in double overtime inside the Pavilion.

“Had a lot of ups and downs. That game was won and lost by us about 10 times,” Ole Miss coach Matt Insell said. “Our kids just kept battling, kept battling. …it was not one of best shooting days at all, but we found a way to win.”

Promise Taylor led a Rebel bench that outscored Florida (8-8, 0-3) 39-5. The freshman had a team-high 16 points to go with eight rebounds and three assists.

Alissa Alston scored 14 points with the biggest coming at the end of the first overtime when she hit a layup at the buzzer to keep the game going, tying it at 70-all.

The Gators trailed by as many as 15 in the third quarter but an offense that was struggling for most of the game outscored the Rebels 22-12 in the final eight minutes of regulation to force overtime.

Florida’s leading scorer Funda Nakkasoglu scored 18 points while Haley Lorenzen had a double-double with a game-high 19 points along with 10 rebounds. Paulina Hersler and and Dyandria Anderson each had 12.

Kate Rodgers has had an up and down season through the first 16 games. She has battled injuries keeping her out of games early in the year. It created in consistent play offensively but on Sunday she showed signs of improvement.

The sophomore proved vital in the first half, scoring all her career-high eight points in the first 20 minutes of play. She grabbed nine rebounds for another career mark.

“I think she’s starting get healthier,” Insell said of Rodgers. “I’m just real proud of how our kids persevered.”

The biggest test of the season comes up on Thursday when the Rebels travel to undefeated No. 5 Mississippi State (17-0, 3-0).