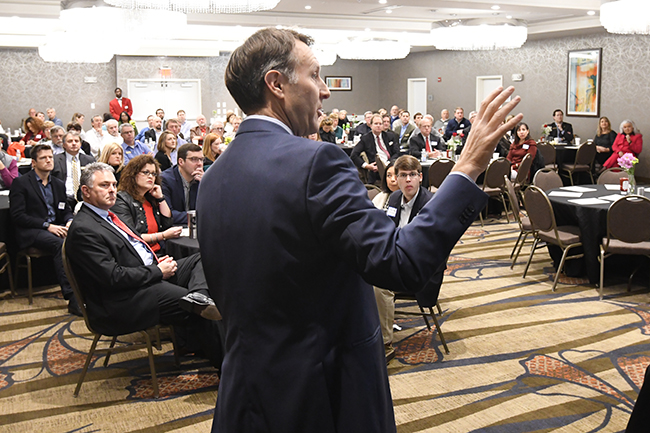 Mississippi state senator Gray Tollison speaks at the Oxford-Lafayette County Chamber of Commerce's annual Eggs and Issues at the Courtyard by Marriott, in Oxford, Miss. on Monday, January 8, 2018.

One of the hot topics discussed was education, specifically the need for better appropriation of funds and the need for more postsecondary education, either at the university level or through workforce training.

Tollison brought up the achievement gap in Oxford School District as one problem for Lafayette County.

“If you look at white students, they’re 73 percent proficient, but if you look at African-American students, in English, they’re 30, 40 percent less. So they’re trying to address that,” Tollison said. “It’s a good problem to have, and that’s one of the highest white proficiencies in the state, but that’s a real challenge to even that out.”

In addition to achievement gaps in grade schools, it was pointed out that over the past 15 years, 12,000 adult Mississippians have enough credits but were not awarded a college degree, and 127 thousand are only a few credits away from earning a degree.

Rep. Jay Hughes also brought up the need for retired teachers in the legislature.

The congressmen also discussed potentially eliminating high school exit exams in the state in favor of adopting the ACT, following suit with over 40 other states.

Another point of discussion was employment and the need for workforce education in the state of Mississippi. Lafayette County currently has the 11th-highest employment rate in the state – a 16.7 percent increase from last year – but as Rep. Steve Masengill stated, the problem is not a lack of able-bodied workers as much as it is a lack of willingness to hold a job.

“It is a constant battle to recruit the workforce,” Masengill said. “It’s a struggle finding people who want to work. Parents are not teaching their kids to want to work.”

Tollison’s statements echoed Masengill’s, pointing out that Miss. has the second-lowest labor force participation rate in the country.

“A portion of that is disability, but a lot of these potential workers don’t have the skills necessary to meet the demand,” Tollison said.

To remedy this, the lawmakers discussed finding a way to provide at least one year of postsecondary education to Mississippians attending public schools, regardless of the length of time they have been out of school, in hopes that the workforce will be rejuvenated.

One topic that has seen press coverage ahead of the 2018 legislative session is the possibility of a state lottery, which could fund education, infrastructure and remedy some budget woes.

Tollison says a lottery is a very real possibility.

“If you’d asked me five years ago, I wouldn’t think the lottery would’ve passed,” he said. “But this year is different. It’s got traction, and could generate over $80 million.”