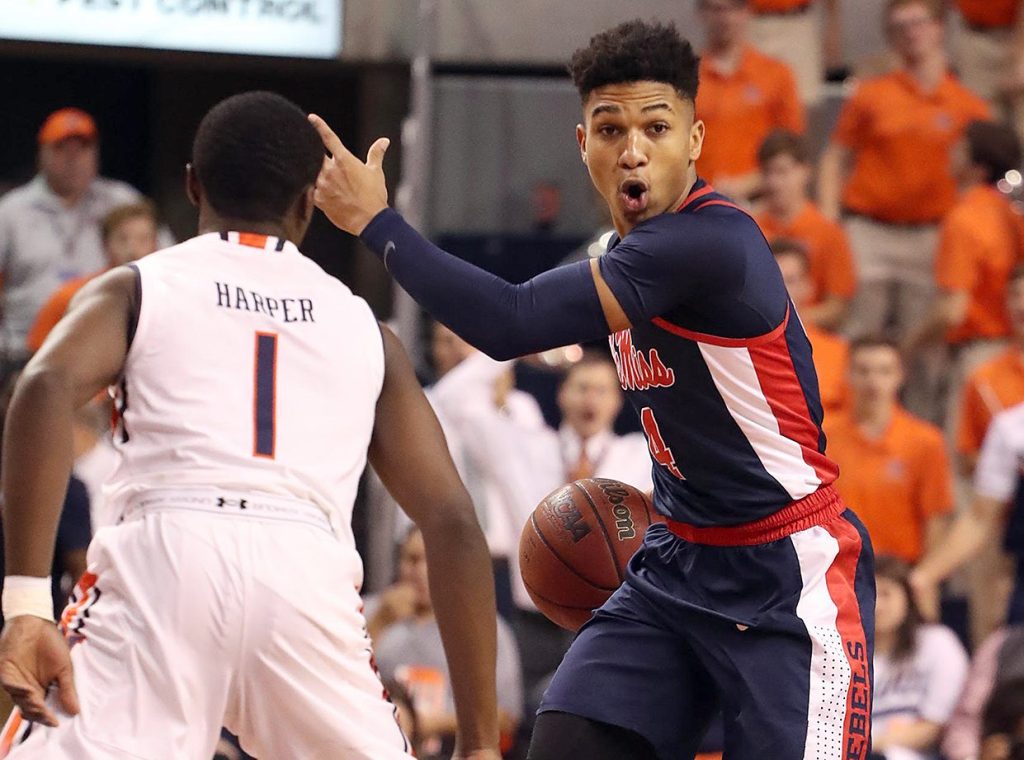 AUBURN, Ala. — Ole Miss spent 20 minutes Tuesday night building more momentum against a program it hadn’t lost to in more than half a decade.

It was halted 20 minutes later by a team that’s got as much momentum as any in the country.

Ole Miss went cold late while Auburn heated up, and the 22nd-ranked Tigers ended the Rebels’ 10-game winning streak in the series with an 85-70 win at Auburn Arena. Breein Tyree led all scorers with 24 points — his third straight game with at least 16 points — while Terence Davis and Bruce Stevens added 13 and 12 points, respectively, for Ole Miss (9-7, 2-2 SEC), but much of that production came in the first half as the Rebels were outscored 50-25 in the second in their first loss to Auburn (15-1, 3-0) since 2012.

Desean Murray led six Auburn players in double figures with 16 points while Mustapha Heron had 15 points for the Tigers, who won their 13th straight game.

“They came out (after halftime) with energy and enthusiasm,” Tyree said. “I felt my team did as well, but they just made plays and we didn’t.”

Playing without leading scorer Deandre Burnett (flu), Ole Miss led by 10 at halftime — Auburn’s largest deficit at the break this season — and stayed in front of an Auburn team playing its first game as a ranked team since 2003 for the first six minutes of the second half, but the Tigers used a quick 6-0 run to take a 53-52 lead on Heron’s layup with 11:55 left. Auburn took control from there, scoring eight of the next 10 points and opening up a 13-point lead with 5:26 remaining on the way to its fifth straight double-digit win.

Ole Miss didn’t get any closer than nine the rest of the way, making just seven field goals in the second half. The Rebels shot just 26 percent from the floor in the second half and went 18 of 27 from the free-throw line, missing eight of their final 17 attempts from the charity stripe.

“In the second half, we just completely melted down, which allowed them to get out and do what they do and get off in the open floor and make plays,” Ole Miss coach Andy Kennedy said.

Ole Miss was the aggressor early and used its switching defenses to force Auburn into contested 3-pointers as the Tigers missed 14 of their first 17 attempts from beyond the arc. The Rebels shot just 39.5 percent in the first 20 minutes but got 12 points from Tyree, 10 from Davis — matching his point total from the first three SEC games combined — and 10 from Stevens, including a 3-pointer at the buzzer, to build a 45-35 halftime lead. The Rebels also grabbed 10 offensive rebounds leading to nine second-chance points in the first half.

But the Rebels stalled against a more extended defense from Auburn in the second half, connecting on just two of their final 12 attempts from 3-point range and committing eight of their 12 turnovers in the final 20 minutes.

“(Seventy-seven) percent of their offense comes from their guards and their backcourt,” Auburn coach Bruce Pearl said. “In the second half, our bigs just did a better job in ball screens and helping our guards get through all that action.”

Meanwhile, Ole Miss struggled to keep a more aggressive Auburn attack from getting to the rim. Only five of the Tigers’ 27 shots came from beyond the 3-point line in the second half as Auburn made 78.4 percent (29 of 37) of its free throws, including 17 of 23 in the final 20 minutes.

“They were certainly downhill,” Kennedy said. “A pretty telling stat is when your opponent makes more free throws than you attempt. It’s probably going to be a long night, most especially on the road in this environment.”

Ole Miss will return home Saturday to take on Florida. Tip is set for noon.