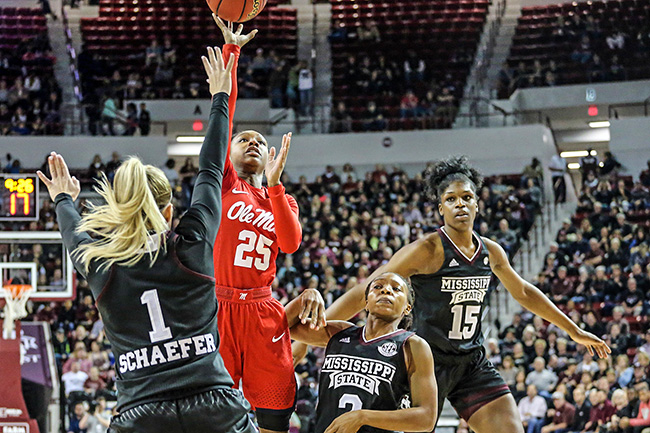 Teaira McCowan scored 25 points and did whatever she wanted against Ole Miss. That included sending four blocks into the stands.

It was part of a dominant performance by No. 4 Mississippi State in a 76-45 win over the Rebels at Humphrey Coliseum on Thursday.

“I don’t think there is anyone on Mississippi State’s or Ole Miss’ men’s team that can guard (McCowan) in the post,” Ole Miss coach Matt Insell said.

It was the eighth straight win in the series for the Bulldogs (18-0, 4-0 Southeastern Conference) and gave Ole Miss (11-6, 1-3) their fifth loss in seven games.

Victoria Vivians had 15 points and Blair Schaefer had 14 for the Bulldogs. McCowan also pulled down a game-high 13 rebounds.

Mississippi State jumped out to a 14-0 lead in the first three minutes of the game and controlled things from the opening tip. The Rebels got to within seven points in the third quarter, but Mississippi State went on a 40-16 run to close out the game.

A key play all night that worked for the Bulldogs  was one where a player would slant towards the rim then toss up a pass to an open McCowan on the other side of the basket for an easy layup. It worked nearly every time with McCowan shooting 12 of 13, setting a new team field-goal percentage record (92 percent). Mississippi State finished with 18 assists to Ole Miss’ four.

Madinah Muhammad led Ole Miss with 14 points and was the only Rebel in double figures. Alissa Alston scored nine points, Shelby Gibson and Barbara Johnson had six points each. Kate Rodgers followed up a career-best nine rebounds against Florida on Sunday with eight boards on Thursday.

McCowan and the Bulldogs outscored Ole Miss 40-22 in the paint while each bench scored 12 points.

Ole Miss will take a week off before playing their third ranked opponent in four games when they host No. 12 Missouri next Thursday (8 p.m., SEC Network).