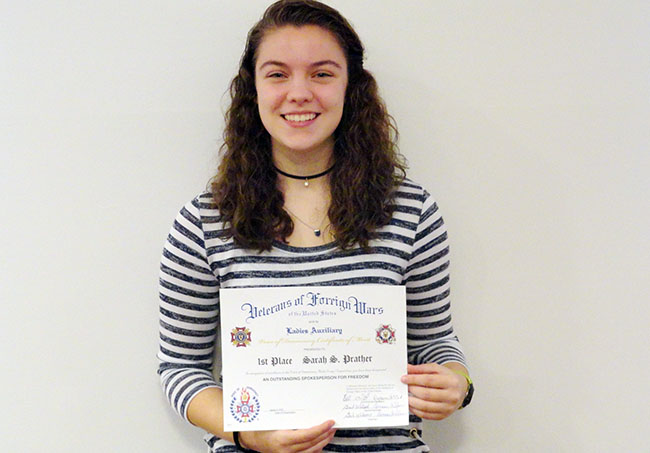 OXFORD, Miss. – Sarah Prather, a 10th grade student at Regents School, will be advancing to the national level as part of the Veterans of Foreign Wars’ Voice of Democracy speech competition.

Prather says she first learned about the competition in her rhetoric class after her teacher, Jacob Todd, submitted students’ speeches. In lieu of presenting the speech at each competition level, the students recorded themselves giving the speeches, so Prather says she didn’t know how far she’d advanced until her mother received a phone call saying she qualified to compete nationally.

“We submitted the speeches back in October, and they said we’d hear back in December,” she said. “We came back after Christmas break and my mom got a call saying I’d won the competition for local, district and state, and they were sending me to Washington.”

Prather’s 600-word speech, “Holding onto Our Humanity,” is about the ways American service members chose to uphold their moral convictions during trying times of battle.

“I used stories from World War I and other wars, about people who defined themselves as leaders by choosing to hold onto their morals and humanity and save those they could’ve killed,” she said. “One of the main stories I talked about was the Christmas Truce in WWI, when both sides came together.”

The Voice of Democracy program was established in 1947. According to the VFW website, the audio-essay program provides high school students with the unique opportunity to express themselves through a democratic and patriotic-themed recorded essay. Each year, nearly 40,000 students in grades 9 through 12 from across the country enter to win their share of $2.1 million in educational scholarships and incentives awarded through the program.

Jacob Todd, the teacher who sent in the speech, says the competition fit right in with the Regents School rhetoric course curriculum.

“We are a classical school, so when our students get to 10th grade they take a rhetoric class,” Todd said. “In this class, there are 16 speeches and persuasive essays. I found an ad for the VFW competition in the EAGLE, and it’s a great opportunity. A competition really ups the ante and changes the quality of work.”

The top prize is a $30,000 scholarship, something Prather says she would be honored to receive and put towards her education, potentially at Ole Miss.

“I have four siblings, so the scholarship would definitely help in paying for my college education,” she said. “I have so many family members and friends here, I couldn’t see why I’d want to be anywhere else but Ole Miss.”

Todd says the win is a victory not only for Prather, but for the Regents School as a whole.

“I can’t tell you how proud I was of her, and as a school, it meant a lot,” Todd said. “We’ve come a long way, and It’s a big victory for us. To have a tenth grader win a state competition and now go to the national level… It speaks to the quality of work we do at Regents School, that we’re competing on a national level in these subjects.”

The national VFW Voice of Democracy competition will be held in Washington, D.C. on March 3 through 7. Prather, who will be traveling with her mother, says she is looking forward to her first plane ride and learning more about the nation’s history, and that her classmates are just as excited for her as she is.

“Regents is a small school, so my classmates and I are very close,” she said. “They’ve all told me how happy they are for me. With us, a big deal for one person is a big deal for everyone.”