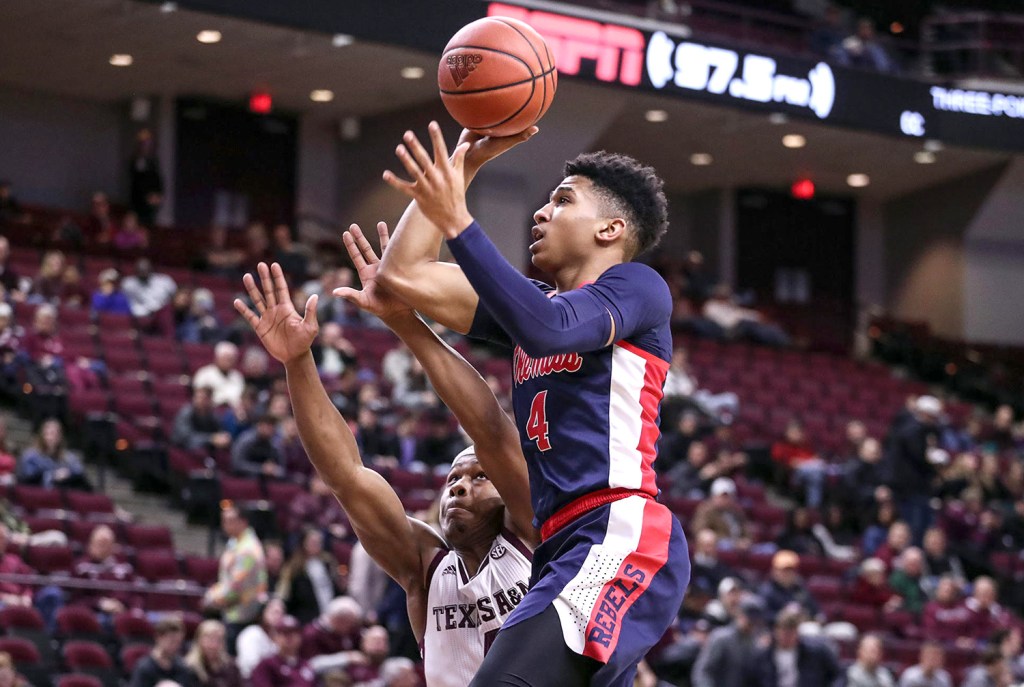 Ole Miss came mere inches from stealing one on the road Tuesday.

Breein Tyree’s potential game-winning 3-pointer rimmed out at the buzzer, and Ole Miss fell to Texas A&M 71-69 at Reed Arena. The Aggies took the lead on a basket with 23 seconds left by Tyler Davis, who missed the initial shot but scored on a putback.

Ole Miss (10-8, 3-3) moved the ball around the perimeter on its final possession and eventually got it to Tyree, who got a clean look from the left wing that rattled around the cylinder before popping out as the Rebels stayed winless on the road and while A&M (12-6, 1-5 SEC) picked up its first league win.

Ole Miss led 60-58 with 6:13 left following a dunk by Marcanvis Hymon, but the Aggies answered with an 11-2 spurt to take their largest lead of the second half with A&M bigs Davis and Robert Williams accounting for six of those points. The Aggies’ inside tandem was a problem throughout for Ole Miss with the 6-foot-11 Davis recording a double-double with 20 points and 12 rebounds and Williams finishing with 18 points and nine boards.

Bruce Stevens led Ole Miss with 20 points and nine rebounds — his second straight 20-plus point game — while Terence Davis and Tyree followed with 12 and 11 points, respectively, for the Rebels, who shot 46 percent from the field. Davis and Williams combined to go 16 of 23 from the field to help A&M shoot 51 percent despite the Aggies going just 5 of 16 (31 percent) from 3-point range.

Ole Miss opened the second half on a 12-3 run to grab the lead on Devontae Shuler’s 3, erasing a 45-37 halftime deficit. But the Rebels never found a consistent stroke from deep, shooting just 24 percent (5 of 21) from beyond the arc.

The Rebels, who fell to 0-4 in true road games, will get their next chance Saturday at Arkansas. Tip is set for 2:30 p.m.