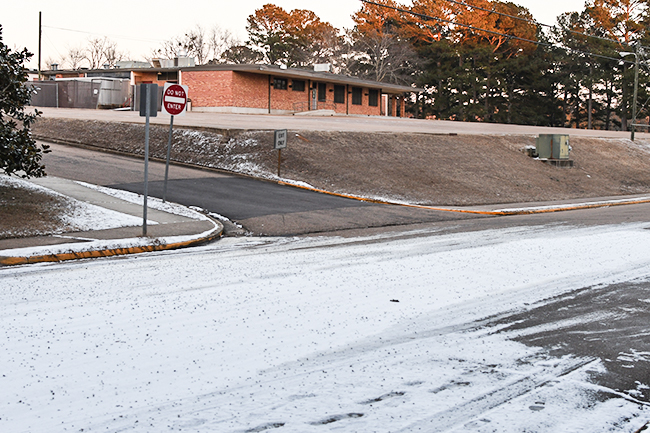 Ice is on Jefferson Avenue outside of Bramlett Elementary in Oxford, Miss. on Tuesday, January 16, 2018. (Bruce Newman/Oxford Eagle via AP)

With many shady county and city roads still covered in ice, both Oxford and Lafayette County school districts decided to keep the doors closed for another day Wednesday, giving students a six-day break.

The University of Mississippi also announced Tuesday night that its Oxford campus will be closed Wednesday.

Garbage collection in Lafayette County has also been canceled. Thursday and Friday routes will run as scheduled, and Tuesday’s route will be collected on Saturday morning.

Lafayette County Emergency Management Coordinator Steve Quarles said while major roads in the county are clear, many secondary roads – or back roads – are still dangerous.

“It’s still extremely treacherous out there,” Quarles said this morning. “Roads that get a little sun are better but it’s still a dangerous situation.”

Quarles said he expects conditions to improve with today’s sunny skies. County road trucks are back out this morning putting down slag, which is a mixture of rocks that works like salt on the roads.

Lafayette County Sheriffs Chief Investigator Alan Wilburn said that while roads were bad Tuesday, there were only four wrecks.

“I don’t believe there were any major injuries,” he said Wednesday. “I think people learned after Friday to stay off the roads. We were very busy Friday morning but Tuesday went much better. Having the schools and businesses closing really helped.”

Inside the city limits, however, Oxford Police Department officers were kept busy during the morning hours Wednesday responding to several wrecks or calls from drivers stuck on the side of the road. According to the OPD daily report, officers responded to 13 wrecks Tuesday.

Temperatures are expected to remain below freezing today but will gradually rise over the next few days. The high on Sunday is expected to be 62.