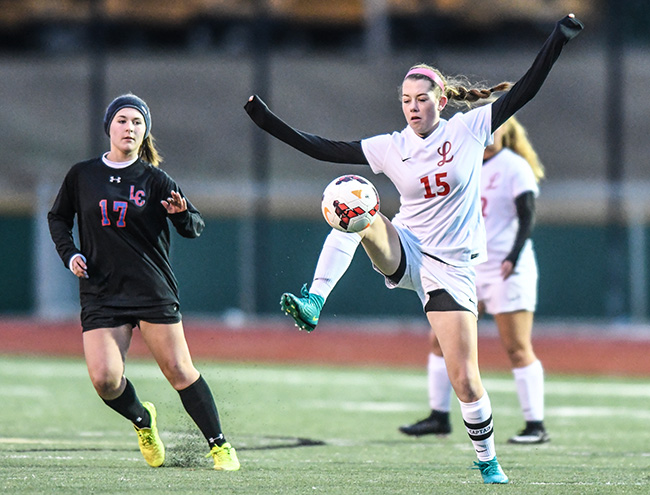 Thomas Jenkins usually does not take penalty kicks, but on Friday the senior got an opportunity to right a mistake earlier in the match that put Lafayette in the position they were in.

The Commodores defeated Grenada 5-4 in the overtime round to win a key Region 2-5A game at William L. Buford Stadium.

A win keeps their playoffs hopes alive, a loss would have eliminated Lafayette altogether.

“I thought the kids played hard. We had a lot of cramps there towards the end. We just hadn’t done anything in a week,” Lafayette coach Gene Anderson said. “For them to push as hard as they did, play as well they did I’m proud of them for doing that.”

It was the first time Lafayette took the field since Jan. 9 before the winter weather affected over a week’s worth of games to be postponed or canceled.

After two overtime periods of shutout soccer the game moved to penalty kicks. Hollis Gaines connected on Lafayette’s first attempt and then it was Jenkins’ turn. The senior connected on his to make it a 2-2 score at the time. Commodore goalkeeper Alexander Diercks blocked the Chargers final two kicks to preserve the win.

“It’s the third penalty kick (game) we’ve had this year,” Anderson said. “We have three solid (shooters) and we’ve been kind of playing and rotating two of them. So, that was Thomas’ first one. Usually I go with the senior because it’s all at stake for them.”

A win Monday at Saltillo will secure Lafayette a spot in the playoffs.

The postseason scenario was not as dramatic for the Lafayette girls, but a win on Friday would have helped nonetheless. Instead, the Commodores could not connect on scoring opportunities and Grenada defeated them 1-0.

Much like the boys’ game was decided by penalty kicks the free kick was also the deciding factor in the girls’ game. Grenada’s Cislee Trost was fouled in the box and awarded a penalty kick. Trost connected for the winning goal in the 21st minute.

Lafayette (14-4, 3-2) had close shots late in the game, including a header by Emma Scott that went directly into the Grenada goalkeeper’s hands.

“(Grenada is) a very talented team. I definitely felt we had a better outing this game than we did at their place,” Lafayette coach Melinda Scruggs said. “I was proud that we were able to do that. I hate that it came down to a PK but that’s part of the game.”

Grenada sweeps the season series over Lafayette, giving them the head-to-head edge in the region standings. The Commodores are assured a playoff spot — most likely the 2 seed — and a win at Saltillo will seal it.

With the nearly state-wide cancellations and postponements of soccer games last week the MHSAA announced on Friday afternoon an extension to the regular season.

Next week was supposed to be the final week of the season before playoffs began on Jan. 30. Now the season will go through Feb. 2 with the first round of the playoffs taking place on Feb. 5 for the girls and Feb. 6 for the boys.