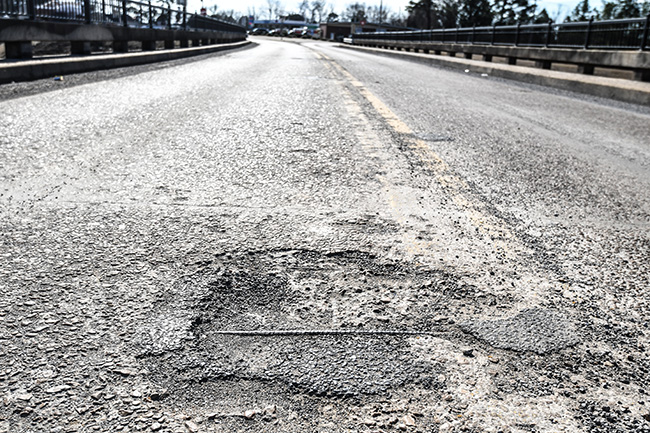 The South Lamar bridge over Highway 6, in Oxford, Miss. on Sunday, January 21, 2018, has several potholes.

The potholes are deep enough to show the metal grating beneath the concrete roadway. However, Lance McCallum, the Oxford MDOT representative, said on Friday the potholes are not cause for concern.

“Snow and ice makes holes in the road come up all the time,” McCallum said. “It’s not something folks should be worried about. If it doesn’t rain too hard we’ll start repairs first of next week.”

McCallum also said, weather permitting, the potholes should be patched up at the beginning of next week. Until then, drivers may want to exercise caution when driving over potholes.

The potholes were caused by water seeping into small cracks in the pavement and freezing. The ice caused the cracks to expand, making the cracks larger. A few days of repeating this pattern, combined with salt, slag (a rock mixture that creates traction on icy roads) and frigid temperatures caused enough damage to require a patch.

Mitch Turner, the MDOT District Engineer out of Batesville, says the potholes on South Lamar Blvd. and elsewhere are a direct result of winter weather.

“When you go through freeze-thaw cycles, like the last week and a half, potholes happen,” Turner said. “It’s not unusual for us to have an event like that and then spend the next whole month repairing the roads in all 17 counties [in the district]. Our crews are without sleep right now, so we’re going to rest up and get back out there starting on Monday.”

Based on information in the National Bridge Inventory, the bridge, which was constructed in 1961, is in good or satisfactory condition. According to Turner, drivers have “nothing to be concerned about” when crossing it, aside from “aggravation.”

Potholes are avoidable, but can cause damage to tires and other parts if a driver hits one. The damage that could occur includes tire puncture, suspension damage, steering system misalignment and even engine damage.

If a driver hits a pothole, they need to check for damage immediately, paying special attention to the car’s tires and wheel rims, as well as the underside of the car, as it could be punctured if it hits the ground.

To prevent pothole damage, drivers are advised to be cautious on roadways, maintain tire pressure, avoid driving in inclement weather and leave plenty of room between their vehicle and the one in front of them.

Gillian Meyers, one of two OHS students to earn…