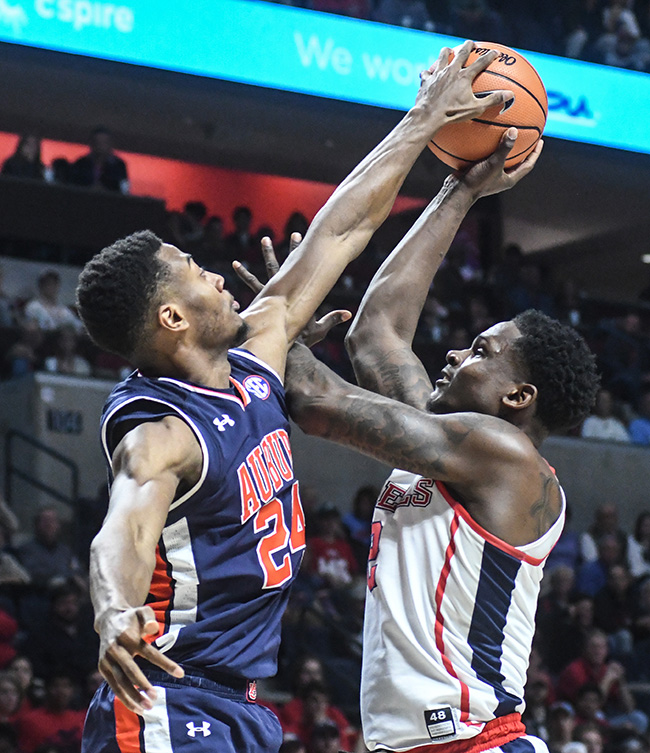 Ole Miss used its 12th different starting lineup of the season Tuesday night against the Southeastern Conference’s top team. But the outcome was the same it’s been for the Rebels of late.

No. 11 Auburn eventually found the only means of an offensive rhythm for either team in a choppy game, pulling away for a 79-70 win at The Pavilion. The Tigers handed Ole Miss its first SEC loss at home and fourth in its last five games with their first win in Oxford since 2008.

“They just looked faster to me really all night,” Ole Miss coach Andy Kennedy said. “I thought we were scrappy enough in the first half to hang around because we didn’t give them a lot of second shots. … I just thought they were faster to the ball.”

Bryce Brown was the catalyst for the Tigers, who won for the 18th time in 19 games. Auburn’s leading scorer tallied 19 of his points after halftime to finish with a game-high 23 on 9 of 16 shooting. Mustapha Heron had 16 points for the Tigers while Jared Harper added 13 points and seven assists.

“I just felt like I had to be more aggressive,” Brown said. “First half, I was just not being as much in attack mode as I was in the second half. That was the biggest difference.”

Deandre Burnett led Ole Miss with 16 points but had just four of those after halftime and combined with point guard Breein Tyree to account for 11 turnovers. Terence Davis, Markel Crawford and Devontae Shuler added 11 apiece for the Rebels, who shot 41 percent from the field and just 23.8 percent (5 of 21) from 3-point range.

Bruce Stevens, who had averaged 13.1 points over the previous six games, got off just one shot and went scoreless in 13 minutes off the bench before fouling out late — one of nine players to finish with at least three fouls. The teams were whistled for 45 fouls with Auburn, the SEC’s top free-throw shooting team, going 18 of 26 from the free-throw line while Ole Miss was 15 of 20 from the charity stripe.

“We all look at it through our own perspective and want the calls, but the reality is (the officials) are right more times than not,” Kennedy said. “I just think we’re super reactionary, and that’s disappointing because there’s certain things you can control.”

One of those areas was rebounding, which Auburn used to offset shooting just 32 percent (9 of 28) from beyond the arc. The Tigers, who got a game-high 10 rebounds from 6-foot-3 forward Desean Murray, overcame a minus-8 disadvantage on the boards in the first half to outrebound Ole Miss 42-41, pulling down 13 of their 19 offensive boards in the second half.

“They killed us on the glass,” Crawford said. “I think whenever a team comes in and gets 19 offensive rebounds — (13) in the second half — I don’t think you’ve got a good chance of winning against a good team like that.”

Things don’t get any easier this weekend for Ole Miss, which will hit the road Saturday to play another ranked team in No. 18 Tennessee. Tip is set for 5 p.m.

“If you hang your head, four of five (losses) is going to turn into five of six or six of seven,” Kennedy said. “Ain’t nobody letting you up off the mat. We’ve got to fight our way off.”