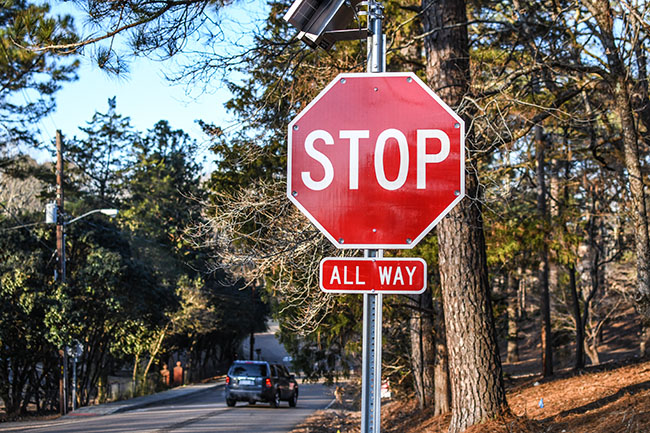 The short drive along Park Drive, with its hills and wooded lots, is considered by many as the more scenic way to get from Bramlett Boulevard to Highway 30.

However, as more cars travel the road while building increases in north Oxford, neighbors became concerned about the number of drivers going faster than the 30 mph speed limit.

To help slow down traffic, the city of Oxford recently put a stop sign at the corner of Park Drive and Thomas Street, creating a three-way stop on Park Drive.

“We were directed to install the multi-way stop by the Board of Aldermen during a board work session earlier this fall,” Robinson said.

The stop sign is not the first one to be put to help deter speeding in Oxford residential neighborhoods.

In 2015, the aldermen approved putting a stop sign on Sisk Avenue and McLaurin Road after neighbors there expressed concerns when traffic along the previously quiet residential street turned into a major road after Oxford High School was built further down on Sisk Avenue as well the Malco Theater Oxford and other businesses and homes were built in Oxford Commons.

In 2013, the Board of Aldermen adopted a Traffic Calming Policy that provides a step-by-step procedure to address citizens concerns regarding speeding cars in neighborhoods, excessive cut-through traffic, or other safety concerns that may arise.

The first step towards achieving traffic calming in a neighborhood is for a citizen to report the problem by submitting a Traffic Calming Request Form to the Public Works Department.

Requests are prioritized on a first-come-first-served basis based on the date the form is received at the Public Works Department.

To submit a request, visit www.oxfordms.net.