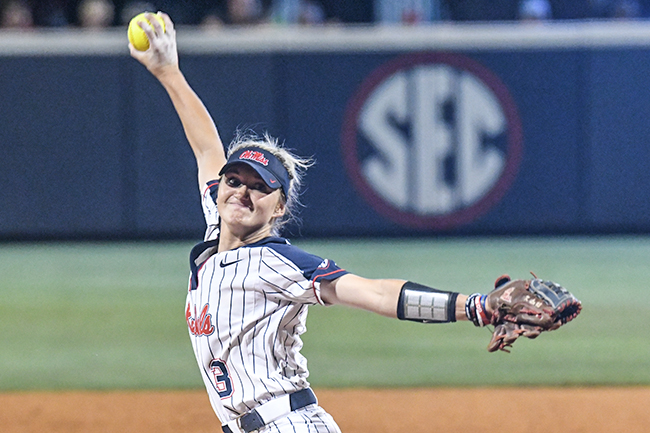 Kaitlin Lee emerged as the face of Ole Miss softball’s Cinderella run last season. Once it was over, she just wanted to hide.

“I didn’t do anything for two weeks whenever I got home,” Ole Miss’ ace said. “I wouldn’t go anywhere. … Didn’t touch (a softball). Didn’t even look at one.”

Lee burst onto the national scene a season ago with her late-season heroics that propelled the Rebels to unprecedented heights as a program. Ole Miss won its first-ever SEC Tournament championship in four games and its first-ever regional as a host in three, and Lee threw every single pitch to reel off seven straight wins and help the Rebels advance to their first-ever super regional.

Lee ended her season with eight straight starts, throwing all 10 2/3 innings and 191 pitches in Ole Miss’ super regional-opening loss to UCLA. Nobody in the SEC came close to matching the 5-foot-6 Lee’s workload — her 249 2/3 innings were 43 1/3 more frames than anybody in the league.

Much like her team, there are newfound expectations for Lee, who will get her first chance to build on last season’s momentum when the Rebels open the season against Penn State on Feb. 9 in the Sand Dollar Classic in Gulf Shores, Alabama. The best way to deal with them, Lee said, is to be herself.

“It was a lot of hard work on my part mentally and physically (in the offseason) just because I would like to live up the hype,” Lee said. “I’m just trying to keep my rep a little bit and be the happy, spunky girl that I know to be and just kind of run with that.”

That doesn’t mean there aren’t adjustments to make.

Lee went 23-11, posted a 1.82 earned run average and held opponents to a .232 average last season despite pitching to contact more often than not, averaging less than four strikeouts per game. But logging that many innings means teams have plenty of film on her, which, if studied closely, will reveal a tendency to pitch inside to hitters early in the count.

Lee said her focus in the offseason has been to establish better command in each quadrant of the strike zone to keep hitters guessing as to the pitch’s location. She said she had nine variations of pitches she could throw at any time last season, a repertoire she’s working on expanding in order to add to her versatility in the circle.

“Instead of them expecting a screwball or a changeup, I want to be able to hit all four corners at any given time,” Lee said. “I worked really, really hard on that and getting that outside pitch good and set and give them a couple new, different things. Little tweaks to my riseball. Little stuff like that.”

“I’m going to have to adjust to the way that (hitters) adjust, so I’m going to keep learning.”

Lee’s workload last season was a byproduct of head coach Mike Smith’s belief in going with the hot hand. Smith said he also kept running Lee out to the circle because there wasn’t much consistency from any of the Rebels’ other arms, but there are some this season that Smith feels could help alleviate the pressure on his ace.

Brittany Finney, who went the distance in the Rebels’ 1-0 season-ending loss to UCLA, will enter the season as Ole Miss’ No. 2 arm, Smith said. Morgan Bruce is back for her sophomore season after throwing the second-most innings for the Rebels last season (73 2/3) while Alyssa Clayton, Elisha Jahnke and a handful of newcomers will also compete for innings this spring.

“I hope (Lee) doesn’t have the same numbers of wins because that means our pitching staff isn’t doing very well,” Smith said. “If she does better at the end of the year with the number of wins she had, it’s not a good situation for us in the circle. But if it is and we’re in Oklahoma City (for the Women’s College World Series), we’re going to continue to ride what’s hot.”

If it comes to that again, Lee is perfectly fine with it.