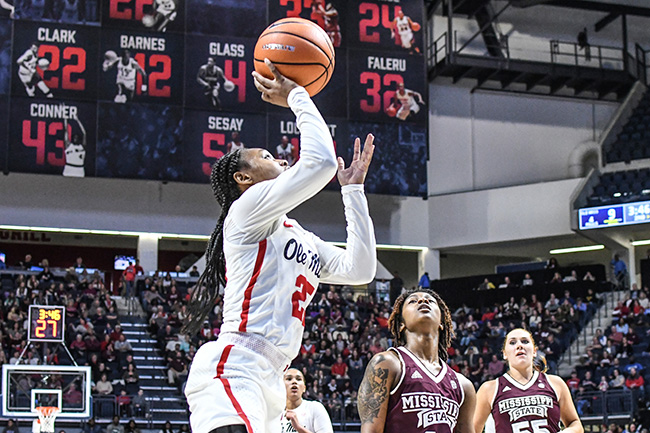 The first half of Ole Miss’ Southeastern Conference slate is over. The run through the buzz saw of a schedule left the Rebels bloodied and bruised after playing five top-11 teams in their first eight games.

Now the focus turns to finding a way to insert themselves into a postseason conversation of some kind. The NCAA Tournament is a long shot at this point yet doable if the Rebels (11-10, 1-7 SEC) do the complete opposite of what they did in January here now in February.

Losers of five straight and nine of their last 11 games dating back to Dec. 17 at Oregon, Ole Miss is on the ropes, but a favorable second-half schedule could possibly be the medicine they are searching for.

The lighter schedule begins tonight at 6 p.m. when the Rebels host Vanderbilt (5-17, 1-7), which is also trying to erase a rough first-half start to conference play. It is also a battle to stay out of the SEC cellar with the loser taking ownership of 14th place in the league.

“They’re mad,” Ole Miss coach Matt Insell said of the mood in the locker room in recent days. “As I keep telling them, we’re 1-7, but it’s not that bad. 1-7 is not good. We don’t want to be there, but it’s not as bad as it looks or seems. We’re very close. We played a tough stretch and played against a lot of tough teams here. We’ve got to go back to work and be ready to play Vanderbilt.”

The Rebels are coming off a 69-49 loss to No. 2 Mississippi State at home after blowing a chance to upset No. 10 Tennessee on the road a week ago.

In their final eight games of the regular season, Ole Miss plays only two ranked opponents with the highest being No. 14 Texas A&M. After Vanderbilt tonight, they will travel to No. 17 Georgia on Sunday for their first of two games against the Bulldogs in the next two weeks.

After going through the first half of the SEC play against opponents with a combined record of 95-34, their final eight games are against teams with a record of 90-58.

“We’ll get it right. I can promise you that,” Insell said. “There’s no quit in my staff and there’s for sure no quit in those kids in that locker room.

Ole Miss’ Kylan Becker eager to live up to…