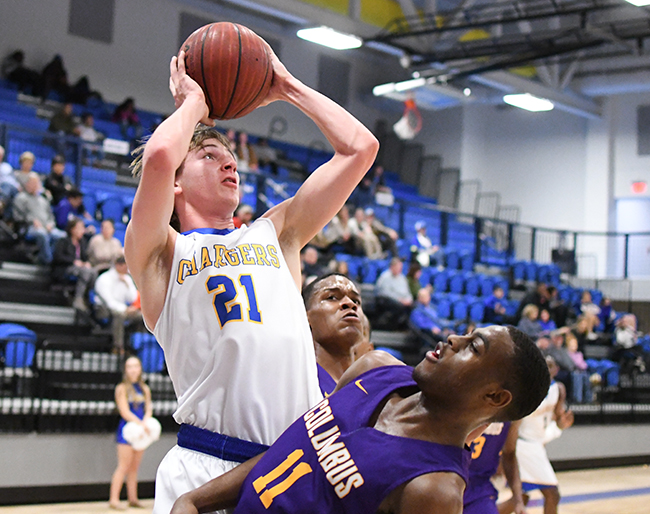 The Oxford Chargers dropped their final region game of the season to Columbus by a score of 55-37 on Monday inside the Oxford High gym.

The loss was Oxford’s first at home this season. Despite the loss, the Chargers (17-5, 4-2 2-6A) have already solidified themselves with a No. 2 seed in next week’s Region 2-6A tournament at South Panola. The Falcons have already locked up the No. 1 seed prior to this game.

The Chargers were up against a lot of size from Columbus (19-6, 6-0), particularly one of the state’s top prospects in Robert Woodard, who ended up having a monster night with 25 points.

Oxford hung tough with the Falcons for a good bit of the first half, but at the end of the night, the Chargers didn’t do enough to combat the size that the Falcons brought to the table down the stretch.

“We showed glimpses of being able to play with them, and that is good to know if we meet up with them again in the region tournament next week,” Tyler said. “We executed our gameplay by spreading it out on offense. We just did not value the importance of blocking out and rebounding and it really made it difficult to stay within range of having a chance to win.”

Oxford found a lot of open shots early on, especially when they were able to exploit the halfcourt press that Columbus did for the majority of the first half. They had some huge first half points from Tucker Scott who started the game three-for-three from beyond the arc and finished the game with 17 points. He has been a key contributor as of late this season.

“Through a 32 minute game, we want [Scott] shooting as many times as he can. We don’t want him turning down shots,” Tyler said. “He is coming through for us.”

J.J. Pegues finished with nine points and Kylan Blackmon with five on the night.

Girls beaten once again
Turnovers and offensive woes doomed the Lady Chargers as they fell to the Columbus Lady Falcons 53-20 to finish winless in region play at 0-6.

Head coach Cliff Ormon hopes to not bring the same team he had Monday night to Batesville next week.

“You hate to have a game like this going into a region tournament,” Ormon said. “We are definitely not going to be taking that gameplan with us to South Panola next week. In the first quarter, I thought our defensive effort was good. We were in the right spots. We just turned the ball over early and never really got going offensively.”

The Chargers did have a strong showing to begin the third quarter with a 4-0 run and a little monentum, but was quickly erased when Oxford’s offensive issues resumed.

Bri Ducksworth and Zharia Metcalf led the charge for the Lady Chargers by combining for 12 of the team’s 20 points.