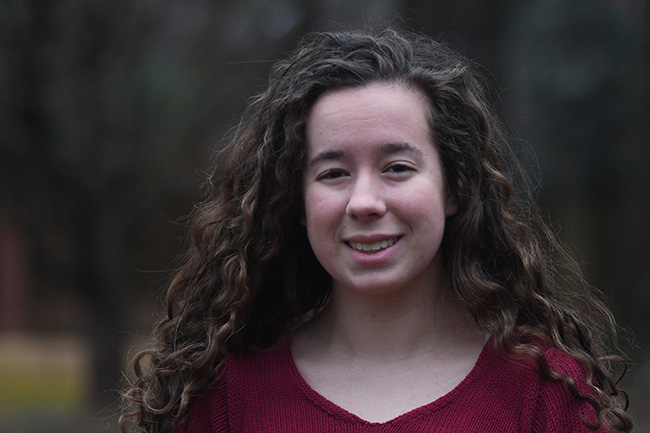 Poetry Out Loud was created 13 years ago by the Poetry Foundation and the National Endowment for the Arts. Today, it has participants in all 50 States and three territories.

Franklin says she first learned about the program after Poetry Out Loud state director Ken Bolinsky gave a presentation in her debate class.

Out of an anthology of over 1,000 poems, Franklin chose the pieces “Diameter” by Michelle Y. Burke, and “I Go Back to May 1937” by Sharon Olds. She says she chose the two poems because she felt the themes were relatable to everyone on some level.

“I was really touched by ‘Diameter,’” Franklin said. “Unfortunately, we’ve all gone through some form of loss in life, so it’s not some weird abstract concept. I thought it was a good way to convey emotions and make sure everyone in the room was affected on some level.”

She also says there were a few educators who guided her through the process.

“My school librarian, Ms. Sharon Osborne, actually helped me a lot,” she said. “She had the librarian from Oxford Intermediate come too, and they coached me through it.”

However, according to Bolinsky, the ideal contestant takes the attention off of themselves and directs it completely toward the poem.

“They say that the ideal Poetry Out Loud recitation would give the listener the same experience of the poem they would have if they were reading it to themselves,” he said. “It’s almost kind of magical, because it’s not acting. It’s not oral interpretation. Your job isn’t to make the audience know what the poem means or tell them what they should feel. It’s about making them sit back and think, ‘Wow, that really spoke to my soul.’”

Part of achieving that ideal recitation, Franklin says, is practicing the pieces to perfection to make reciting them seem effortless.

“Judges hate it when you get on stage and act like you’ve been practicing,” she said. “It has to look natural, but you have to practice in order to be good, so it’s all about finding a balance and saying, ‘How can I recite this as many times as I can without it looking too mechanized or rehearsed?’”

Franklin admits she was nervous before going onstage, but says she was even more nervous for the dentist appointment she had after the competition. Thanks to debate team and mock trial, she says she’s comfortable with public speaking, so the real challenge is reciting the words with the appropriate expression.

“It was the first time we’d heard her recite anything onstage,” Fennelly said. “There are many hours of work that go into figuring out the correct emotions, voice inflection and body language necessary to properly convey a poem. Both my husband and I felt extremely proud, sitting in the crowd.”

Next, Franklin and eight other students – three from each section of the state – will participate at the state level, which will be shown in five states from the Mississippi Public Broadcasting studio in Jackson on March 9.

Franklin says the idea of being on camera is one thing that makes her a little nervous.

“State is one thing I’m pretty nervous about, just because I’ve never seen myself on television,” she said. “I’m not somebody who, wants to be famous or anything. I’m just excited to have the whole experience, and part of that is television.”

Still, Franklin says the best part of Poetry Out Loud – aside from missing algebra class – is the chance to discover poetry and experience pieces she might not hear otherwise.

“I’m not really a poetry person, but I’ve found some things that I really genuinely like,” she said. “Through the competition, even if it’s a piece that doesn’t suit my voice or is for another gender, it’s still a good experience.”

To learn more about the Poetry Out Loud contest or find out how to get your class involved, visit www.poetryoutloud.org.